Yesterday a very small company won a  very big victory against a very large software vendor.  The small company is i4i, a Canadian company that claimed that the large company had not infringed its patent accidentally, but knowingly and willfully, after engaging in discussions relating to the very same technology in question.  For the small company, the functionality in question represented its main product, so when the big company bundled the same technology for free in its own product, i4i's business was gutted.  If you've been following the story already, you know that the big company is Microsoft.

Yesterday's big victory was the affirmation by an appellate court of the trial court's finding of willful infringement.  Under the ruling on appeal, Microsoft had been required to remove its infringing code within 60 days, and also pay i4i $290 million in damages due to the lost sales and other harm it had caused.  Here are my thoughts on what just happened, and what's likely to happen next.

According to Reuters, one more thread in the long-running saga of Rambus and the JEDEC SDRAM standards abuse saga appears to be reaching an end.  Specifically, the wire service reports:

European regulators are set to accept a proposal by Rambus Inc to cut royalties to settle antitrust charges, according to a person familiar with the situation,... Under the terms of the settlement,...Rambus will not be fined and will not be found liable for any wrongdoing, the source said....Rambus will also offer some of its older products for free as part of the settlement.

The story goes on to state that the regulators are expected to announce next Wednesday that they will accept without change the terms offered last June by Rambus.  If this is confirmed, Rambus will agree to cap its royalties at 1.5 percent to 2.65 percent per unit for identified types of SDR memory controllers and memory types for five years, beginning in 2010.

If the settlement is announced as anticipated, U.S. regulators may wonder whether their brethren across the pond are better poker players than they are.

Why did perennial litigant Rambus, Inc. settle with the European Commission? 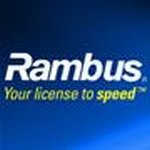 Certainly the most watched standards-related legal conflict of the decade involves the participation of memory technology vendor Rambus, Inc. in a working group hosted by standards developer Joint Electron Device Engineering Council (JEDEC) in the early 1990s.  The fame (or notoriety) of the conflict arises in part from the importance of the conduct at issue (did Rambus set a "patent trap" for implementers of the standard that emerged from the working group?), and in part from the seemingly endless string of law suits that resulted from that conduct some fifteen years ago.

Most of these suits were brought by Rambus against vendors that refused to pay royalties when they implemented the standard, but these suits almost always resulted in vigorous counterclaims against Rambus, brought by those same implementers.  And investigations into Rambus's conduct were also brought by both the Federal Trade Commission (FTC) in the United States, and by the European Commission in Europe.  A separate string of cases related to alleged price fixing and other improper conduct by other vendors that participated in the same working group, which ended in record settlement amounts being paid by those vendors to the regulators.

It would be an understatement to observe that Microsoft's patent suit against Dutch GPS vendor company TomTom has been closely watched.  Why?  Because Microsoft alleges that several of the patents at issue are infringed by TomTom's implementation of the Linux kernel.  In this first month of the dispute, the most urgent question has been this: will TomTom fight or fold?  Now we have the answer:  TomTom has decided to fight - and perhaps fight hard.  Yesterday, it brought its own suit against Microsoft in a Virginia court, alleging that Microsoft is guilty of infringing several of TomTom's own patents.

The question that many Linux supporters are now asking is this: is this good news for Linux, or bad?  Here are my thoughts on that important question.

Updated 3:30 PM:  Jim Zemlin, Executive Director of the Linux Foundation has just posted a statement, which you can find at the end of this blog entry.  In addition, Dow Jones reports that "TomTom spokesperson Taco Titulare told Dow Jones Newswires Thursday that TomTom rejects the Microsoft claims and that the firm will "vigorous defend" itself, without elaborating."

I first learned of Microsoft bringing suit against in-car navigation company TomTom NV when I got an email from a journalist asking for comment.  He in turn, had gotten the news from Todd Bishop's Microsoft Blog.  Why all the buzz?  Because apparently several of the patent claims relate to TomTom's implementation of the Linux kernel - and while Microsoft has made noises publicly and threats privately for years alleging that Linux infringes multiple Microsoft patents, it has never actually brought a suit against a Linux implementer specifically alleging infringement by the Linux portion of their product.

The result is that across the industry, everyone is asking the same question:  What Does it All Mean?  For what it's worth, here's my take. 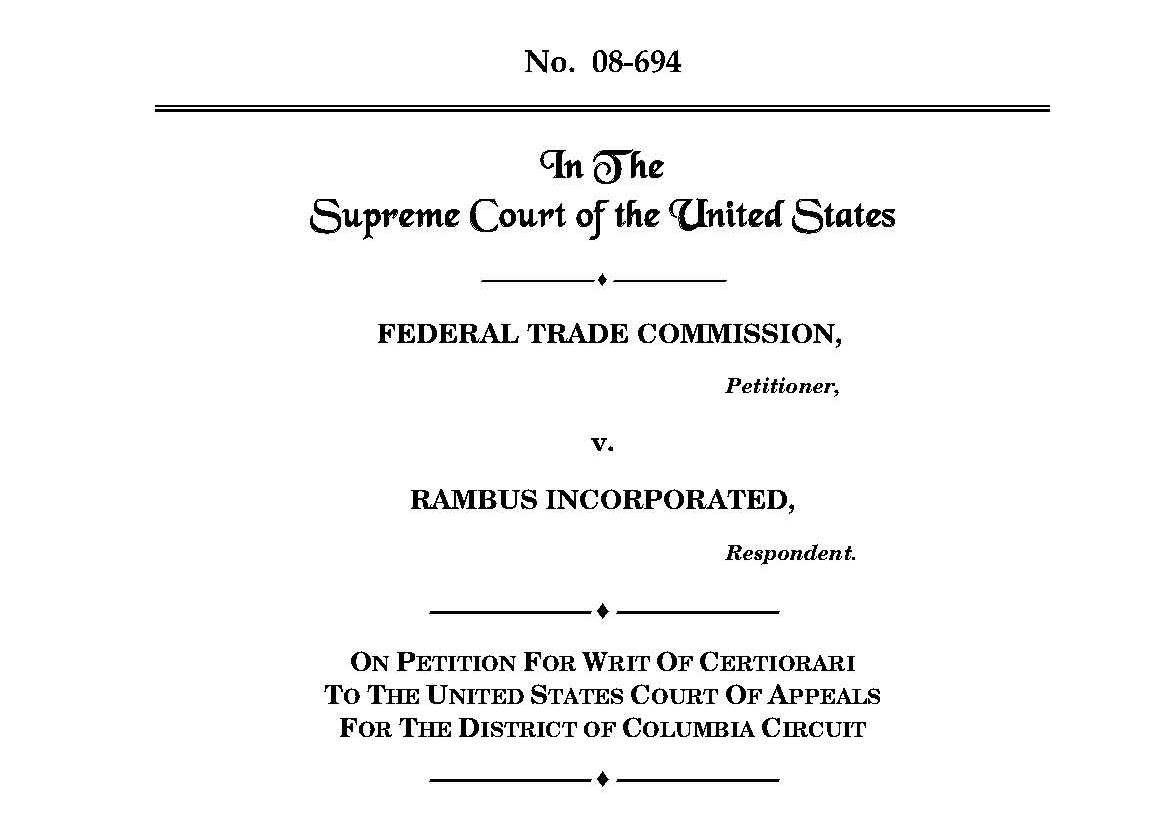 Long time readers will recall that perhaps the most high-profile (and high emotion) legal dispute involving standards revolves around the conduct of a memory design company called Rambus Incorporated.  The emotion arises in part because Rambus develops and licenses technology, but does not actually fabricate semiconductors.  This has made its stockholders particularly partisan, as its stock has risen and fallen in synchrony with its fortunes in court, and its detractors particularly irate, because they view Rambus not only as a patent troll, but also as one that has gamed the standards development process during the creation of a universally adopted SDRAM memory standard.  Hundreds of millions, and perhaps billions, of dollars of royalties are at stake.

The Federal Trade Commission (FTC) is one of those that thinks that Rambus gamed the system and deceived the marketplace, and I'm another.  That's why the FTC is asking the Supreme Court to overturn a lower court decision and reinstate the FTC's conviction of Rambus, and why I'm filing another in a series of "friend of the court" briefs in support of that goal.

Today those who believe in free content and free and open source software won a major victory in court, as reported by Larry Lessig, Mark Radcliffe,  and Pamela Jones, among others.  The underlying facts, and the legal counsel involved, were hardly major figures on the commercial landscape: the open source software at issue - the JAVA Model Railroad Interface - had been developed by the plaintiff, Robert Jacobsen, for model train buffs under an infrequently used free and open source license, and the attorney representing the plaintiff - a solo practicioner in Maryland - was young and inexperienced.  But as often happens, a small case between small parties can have huge implications.  And decisions that may make good strategic sense to the parties can also have disastrous consequences for those that are not in the same situation.

The case in question is called Jacobsen v. Katzer, and you can read the opinion here (a brief summary of the facts and proceedings to date is here).  It's been going on for quite awhile, and a lot of people have spent a lot of time behind the scenes helping make sure that it came out the right way.  That said, it hasn't received a lot of attention outside of FOSS legal circles, so for those of you who haven't heard of it before, I'll try to distill briefly why this decision is so important, and why people are so pleased with today's decision.

Last week I sent out the latest issue of Standards Today, my bi-monthly eJournal of "News, Ideas and Analysis."  This time around, my topic is what I call "The Open Collaboration Revolution," by which I mean the unprecedented ways in which the Internet and the Web are allowing communities to form around projects of all types.  The benefits that can be enjoyed as a result of such collaboration are leading those involved to reevaluate the traditional rights of creators and content owners.  What they are realizing is that they have more to gain by sharing than hoarding.  The result is a new focus on "openness" of all kinds - not just open standards and open source, but open development, open content, open data and more.  The promise held out by these new methodologies and the innovative legal tools that have been created to serve them will, I believe, be truly transforming.

What follows below is the Editorial from this issue, titled Patience and the Possibilities of Collaborative and Derivative Expression.  If that piques your interest, you may want to read the deeper dive that I take on openness of all types in the Feature Article for this issue, titled Openness and the Pursuit of Knowledge.

The one great principle of the English law is, to make business for itself. There is no other principle distinctly, certainly, and consistently maintained through all its narrow turnings.  Charles Dickens, Bleak House

According to John the Apostle, the poor will be always with us.  So too, it seems, will the never-ending skein of cases enmeshing Rambus, Inc., the brash memory design company that famously participated in a JEDEC standard setting process in the early 1990s, and later asserted various patent claims against implementers of the very standards created by the working group in which it participated.  And while the lawyers may not be to blame in this case (or more properly, these many cases), the flood of litigation involving more than a half a dozen different vendors and government agencies certainly rivals the worst that Jarndyce ever threw against Jarndyce in Charles Dickens' epic tale of litigation gone wild.