The brief itself can be viewed on line here, and the Summary of Argument is as follows:

The purpose of this amicus brief is not to make legal arguments, but to acquaint the Court with information supporting a decision by the Court to allocate its limited time to consideration of the legal questions at issue.  In brief, amici curiae wish the Court to understand the increasing dependency of all aspects of society, commerce and government on standards, and the fragility of the process by which such standards are developed.  Amici curiae believe that the type of conduct that the FTC found Rambus Incorporated (Rambus) to have engaged in, if allowed to go unredressed, would severely undermine and jeopardize the continued existence of that fragile process.

Standards are vital to government procurement, national competitiveness, and the efficiency and safety of society.  Standards are created by voluntary, self-governing organizations that have no effective enforcement power to police the conduct of their members.  In the information and communications (ICT) sector, the implementation of standards often results in the infringement of the patents of members and/or non-members.  If the owners of these patent claims are only willing to license their claims selectively, or on unreasonable or discriminatory terms, then severe consequences will follow, including unreasonable costs to end-users, unfair discrimination against individual industry participants, and often the complete failure of the standard in question.  While such a result cannot easily be avoided in the case of a patent claim owned by a non-participant in the standard setting process, it would be highly inequitable for a patent owner to deceptively exploit its participation in an SSO to ensure such a result for its own benefit.

The value and importance of standards in the modern world is profound.  As an example, the Department of Commerce concluded in 2004 that standards affect an estimated 80 percent of world commodity trade.  U.S. Department of Commerce, Standards and Competitiveness – Coordinating for Results 1 (May 2004).  In the ICT sector, the role of standards is particularly crucial, as vital infrastructural elements such as telecommunications, the Internet and the Web literally cannot exist without common agreement on, and universal implementation of, enabling protocols and other standards.

Moreover, private sector standards are often incorporated by reference into laws. But unlike public laws and regulations, standards are developed within a process that is not only self-regulating, but also largely unsupervised, except by those that directly participate.  As a result, the success or failure of private sector standards development is highly dependent upon trust.  If those that participate conclude that abusing the system is too easy to accomplish, and that such abuse is too lightly punished if discovered, then the entire system can find itself in danger of collapse, because the risks of participation and adoption of standards become greater than the benefits to be gained.  Were such a collapse to occur, virtually no aspect of society would be immune from the consequences.

More specifically, amici curiae wish to acquaint the Court with the following facts, as developed in greater detail in the arguments that follow:

1.  Interoperability standards and other technical specifications play a vital and essential role in all aspects of modern society, commerce, government, and indeed, virtually every other aspect of our modern, networked world.  With the increasing utilization of the Internet to support and enable finance, emergency response, homeland security, defense, healthcare, government services, education, communications, entertainment and much more, the efficient development and ongoing maintenance of hundreds of new ICT standards each year is becoming especially critical.

2.  In enacting the National Technology Transfer and Advancement Act of 1995 (NTTAA), Pub. L. No. 104-113, 110 Stat. 775 (1996), Congress instructed each Federal agency to utilize standards created by SSOs in preference to “government unique” standards to the extent "practicable."  In so doing, Congress deferred to the private sector to supply the tens of thousands of standards upon which the operations of government, and the implementation of its policies, must rely.  In contrast to the government-supported process that is followed in many other nations, the United States depends upon representatives of industry, academia, consumers and government to participate, at their own cost, in hundreds of non-profit SSOs to develop standards for the good of all.

3.  Since the enactment of the NTTAA, government has become far more dependent upon standards to achieve its goals.  Examples of current top-level policy areas that will be heavily dependent upon the rapid development of essential ICT and other standards include homeland security, electronic records for healthcare, E-Government and global warming.

4.  SSOs adopt IPR policies that are intended to identify patent claims that would be "necessarily infringed" by an implementation of a standard under development, and to ensure that such "necessary claims" will be made available to all would-be implementers under at least RAND terms.  Absent such knowledge and commitments, a patent owner may gain a degree of monopoly power over the implementation of a standard that can be greatly abused, to the detriment of consumers.

5.  The standards development process relies heavily on a presumption of trust, and specifically on the assumption that members will honor their obligations under IPR policies.  If that trust can be violated with impunity, then there is more for participants to lose than to gain by participating, and the very existence of the standards development infrastructure can become in danger of collapse.

6.  Due to budget constraints and other concerns, SSOs are not capable of enforcing their rules in court.  Because of the great cost of patent infringement litigation, it is extremely expensive for SSO members, and others that adopt standards, to defend themselves when IPR policy rules are violated.

7.  SSOs, their members, those that adopt standards, and those that rely upon the standards they produce, therefore need to be able to rely on the courts to defend, regulators to robustly enforce, their interests when standards development participants betray their duties of trust and violate IPR policy rules.

8.  If the decision of the Circuit Court stands, then the integrity and viability of the standards development process will be endangered, at great cost to society, to the national interest, and to those that have made the substantial investment in time and money, and undertaken the business risk, to participate in good faith in the development of standards.

The antitrust laws are particularly important to preserving the integrity of the standards development process.  Unlike contract and fraud remedies available under state laws, the antitrust laws are national in scope, and therefore provide greater predictability of result.  They also permit both public (via the regulators) and private (by aggrieved parties) action, and are specifically constructed to protect competition.  If the courts decline to enforce the integrity of standard setting when such laws are violated, then the option of “gaming” the system will become more attractive to SSO members.  As a result, additional litigation will reach federal and civil courts, discouraging companies from adopting the standards in question, and over-burdening those courts.

Given the rapid pace of innovation in standards-dependent areas such as the technology and telecommunications sectors and the increasing dependence of the world on the products of such innovation, amici curiae strongly support granting certiorari in this case.

There are several other amicus briefs being filed, one by JEDEC, the SSO that hosted the process underlying the dispute itself.  Another has been filed on behalf of four high tech companies that rely heavily on standards (HP, Cisco, Sun and Oracle), another by CCIA, a trade association that focuses on policy issues, and still another is expected to be filed by two  law professors.  Each of these will argue the points of law that they hope the Court would consider.  My partner, Lee Gesmer, is collecting all of the amicus briefs as they are filed, as well as those of the parties themselves, at this ScribD page.  But first, the Court has to agree to take the case, and that’s where the SSO amicus brief comes in.
Whether the Supreme Court chooses to take the case is, of course, always a long shot.  Lee points out in his own blog entry (which provides a good overview of the legal significance of the Rambus case), that:


Persuading the Supreme Court to review a case is harder than getting into Harvard. In its most recent term the Court decided about 70 cases, out of over 7,000 appealed.

Hopefully, the arguments made in the SSO brief, and the impressive list of organizations on the cover, will incrementally raise those odds.  I appreciate their support, and their willingness to associate their names with this brief. 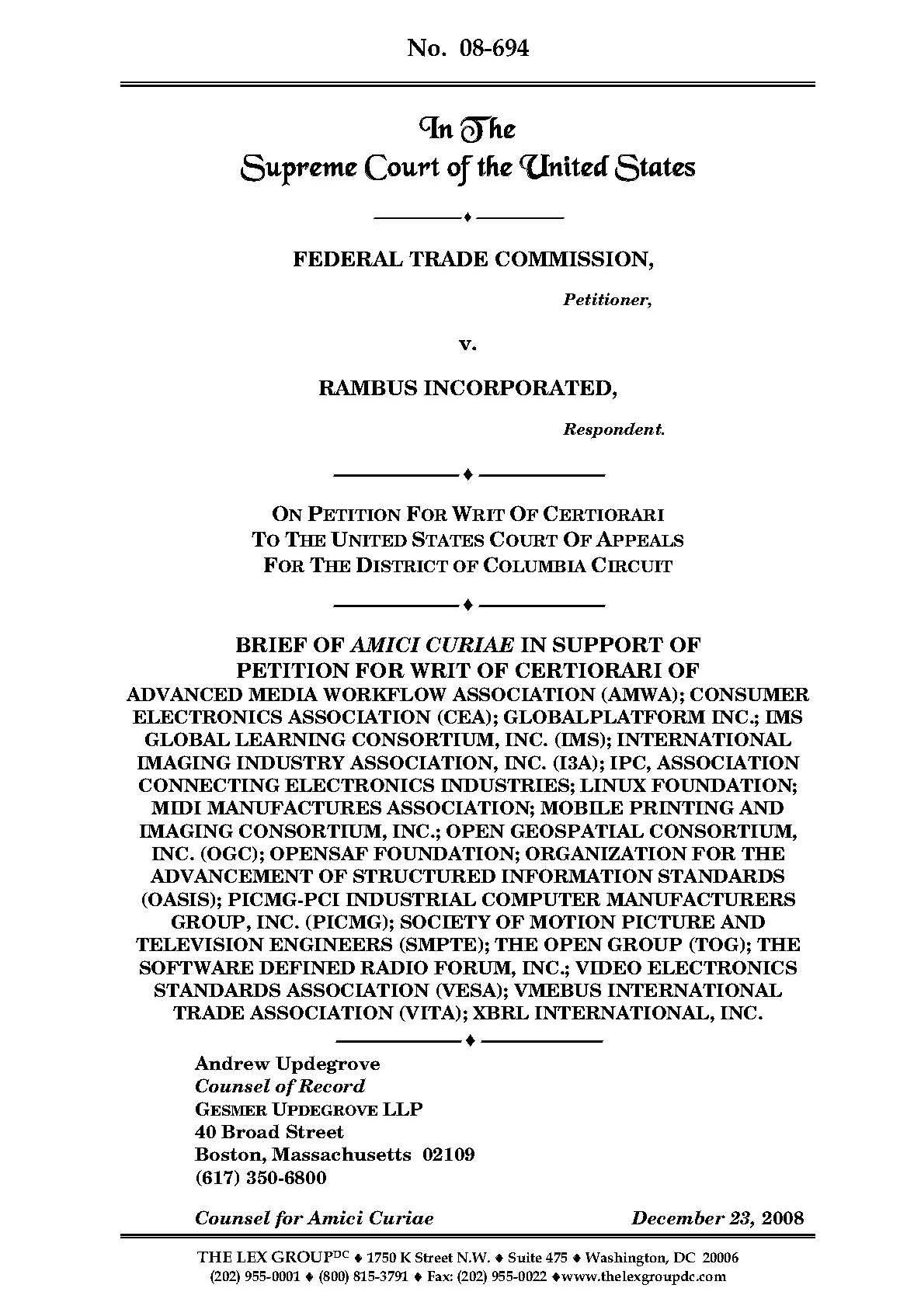