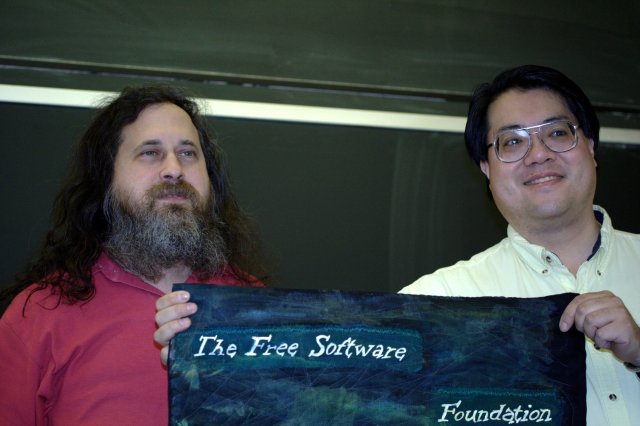 If you haven't already heard the news, long-term kernel developer and pillar of the open source community Ted Ts'o has been named the new Chief Technology Officer of the Linux Foundation.  Ted is a great choice for a variety of reasons, one of which is that few people have been knocking around the Linux world longer than Ted - he was the first North American kernel developer (in 1991).  And to the left, that's Ted receiving the FSF 2006 Award for the Advancement of Free Software from Richard Stallman.

I first met Ted about five years ago, when I began representing the Free Standards Group, and where Ted and I served as Board members.  Ted had been part of FSG's efforts from the beginning, and he has continued to play a major role both at FSG as well as at the Linux Foundation ever since.  Besides being present at the creation of the Linux Standards Base and nearly present at the dawn of the Linux kernel, he's also simply a great guy, both to work as well as to have a beer with.  Those traits, as well as his technical prowess, will all be even bigger assets for the Linux Foundation in Ted's new role than they have in the past.

As CTO, Ted will lead all technical initiatives, oversee projects such as the ongoing development of the Linux Standard Base (LSB) and the activities of the Open Printing working group, serve as the technical go-between with Foundation members, and also act as the primary inteface between the Foundation and the its Technical Advisory Board, which represents the kernel community.

Ted’s achievements and involvement in the Linux world are almost too numerous to mention, but here’s a sampling to give you a feel for his chops in all things open source:

Not too shabby, and there will be more to come, I’m sure.

Ted is replacing Markus Rex, who has returned to Novell to become the acting general manager and senior vice president of Novell’s OPS business unit.

Linux Kernel Developer Ted Ts’o to lead Linux Standard Base and ISV relationships, among other initiatives

SAN FRANCISCO, December 18, 2008 – The Linux Foundation (LF), the nonprofit organization dedicated to accelerating the growth of Linux, today announced that Linux kernel developer Theodore Ts’o has been named to the position of Chief Technology Officer at the Foundation.

Ts’o is currently a Linux Foundation fellow, a position he has been in since December 2007. He is one of the most highly regarded members of the Linux and open source community and is known as the first North American kernel developer. Other current and past LF fellows include Steve Hemminger, Andrew Morton, Linus Torvalds and Andrew Tridgell.

Ts’o will be replacing Markus Rex as CTO of the Linux Foundation. Rex was on loan to the Foundation from his employer Novell. He recently returned to Novell to work as the acting general manager and senior vice president of Novell’s OPS business unit.

As CTO, Ts’o will lead all technical initiatives for the Linux Foundation, including oversight of the Linux Standard Base (LSB) and other workgroups such as Open Printing. He will also be the primary technical interface to LF members and the LF’s Technical Advisory Board, which represents the kernel community.

“Ted is an invaluable member of the Linux Foundation team, and we’re happy he is available to assume the role of CTO where his contributions will be critical to the advancement of Linux,” said Jim Zemlin, executive director of the Linux Foundation. “We’re also very grateful to Markus Rex for his assignment at the Foundation and thank him and Novell for their commitments to Linux and the LSB.”

“I continue to believe in power of mass collaboration and the work that can be done by a community of developers, users and industry members,” said Ted Ts’o, chief technology officer at The Linux Foundation. “I’m looking forward to translating that power into concrete milestones for the LSB specifically, and for Linux overall, in the year ahead.”

Since 2001, Ts’o has worked as a senior technical staff member at IBM where he most recently led a worldwide team to create an enterprise-level real-time Linux solution. He will return to IBM after this two-year fellowship at The Linux Foundation.

Ts’o has been recognized throughout the Linux and open source communities for his contributions to free software, including being awarded the 2006 Award for the Advancement of Free Software by the Free Software Foundation (FSF).

Ts’o is also a Linux kernel developer, a role in which he serves as ext4 filesystem maintainer, as well as the primary author and maintainer of e2fsprogs, the userspace utilities for the ext2, ext3, and ext4 filesystems. He is the founder and chair of the annual Linux Kernel Developers’ Summit and regularly teaches tutorials on Linux and other open source software. Ts’o was project leader for Kerberos, a network authentication system used by Red Hat Enteprise Linux, SUSE Enterprise Linux and Microsoft Windows. He was also a member of Security Area Directorate for the Internet Engineering Task Force where he chaired the IP Security (ipsec) Working Group and was a founding board member of the Free Standards Group (FSG). Ts’o studied computer science at MIT, where he received his degree in 1990.