Skip to primary content
I'm currently hiking and camping in New Mexico and Utah, which explains this off-topic post. I'll continue to cover big news when I'm able to access email, and will also upload and time-phase these entries for posting when I come into town for gas and supplies. To find more of this type of writing based on past trips, look to the folder link at left titled Not Here but There: A Wilderness Journal. 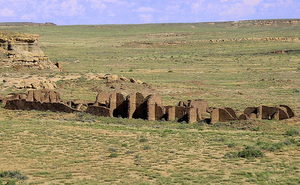 I did not visit the ruins of Kin Bineola the night I arrived nearby, but made camp and turned in instead. August is the month of thunderstorms in the Southwest, and especially in New Mexico. By midafternoon, the anvil shapes of thunderheads were spreading in the four corners of the sky, and not long thereafter grey skirts of rain began their slow descent to the parched earth beneath them. Thunder rumbled richly across the valley, and the sky acquired a rich assemblage of angry grey clouds, towering ivory domes blushed with gold by the setting sun, and a double rainbow arching overall.
I dislike tents. I rarely use them in the Southwest, and revel in the stars above. Usually, there is no rain and never are there any noxious insects to annoy, unless you choose to lay yourself down by the rare, still waters. But this trip, I should have known better and brought one along, as nature has made its habits known here for long enough that I should not have expected it to make an exception just for me.

So there was naught to do but rig my ground sheet up as a rough lean-to against a barbed wire fence, and listen to the pit-pit-patter-pit of rain from dusk to midnight as the occasional thunderstorm struck a glancing blow, scattering droplets via gusty winds as it passed in the night, and illuminating the valley floor in sudden bursts of light as it rumbled by.

The next morning I broke camp, and investigated the area around me that I had ignored in the gathering night. A warren of holes was a dozen feet away, with holes too large for ground squirrels and too small for badgers. Just right for prairie dogs, as it happens, but there were none to be seen, nor was the grass chewed away in a wide circle around, as is the norm around a colony of these sociable and endearing creatures. My one quibble with having these amiable rodents as company is the fact that they do tend to attract rattlesnakes, which see in a prairie dog colony the equivalent of a fast food franchise. In the event, they were good neighbors, and had not disturbed my good night’s sleep. 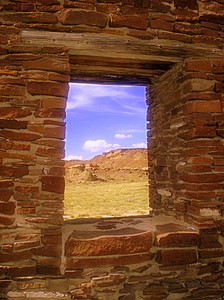 With the sun already up and the heat not long to follow, I set off to visit the ruins, skirting the valley floor along the north to approach it from its more dramatic long-walled side. From this vantage point, the Great House is indeed impressive, rising like a Spanish castle from the parched ground, but in fact hundreds of years older. Like a castle ruin, the walls rise to irregular, broken heights. But unlike the fortresses built by those that had the better end of the guns, germs and steel equation, the Anasazi had only the elements and, at most, arrows and spears to keep out, and not the impact of cannon-fire to withstand. The result is a ruin that is more delicate, and all the more remarkable for standing so long a test of time.
In part for the same reason, the stonework of the Anasazi – the culture that built both the cliff houses as well as the Great Houses of Chaco – is extremely fine in workmanship. Unlike the adobe walls of the great buildings raised by the Hohokam to the south, and still seen in many of the pueblos still inhabited today, the Anasazi used finely dressed, carefully laid stone to face rougher stuff in the core of their walls, with all held together by a mud-based mortar. Over the narrow, low doors and windows, ancient timbers, usually the thickness of your arm or less, still uphold the stones that were laid atop them 1,000 years or more ago..
Kin Bineola is not as remarkable as Pueblo Bonita and the other, better known structures a dozen miles away, but its isolation makes it perhaps more poignant. The dale in which it nestles is shallow, and the dry vegetation washes away in sweeping waves in all directions in an endless sea of yellow grass and pale green brush, broken only by a few low mesas. Miles away, a shimmering point of light, the glint of the spinning vanes of a windmill filling a stock tank with waters drawn from below, is the only suggestion of modern life, but for the dirt track leading to the trailhead nearby. When I drove away, the only tracks were those I left behind.

subscribe to Standards Today – a free eJournal of News, Ideas and Analysis