I'm currently hiking and camping in Nevada and Utah, which explains this off-topic post. I'll continue to cover big news when I'm able to access email, and will also upload and time-phase these entries for posting when I come into town for gas and supplies. To find more of this type of writing based on past trips, look to the folder link at left titled Not Here but There: A Wilderness Journal. 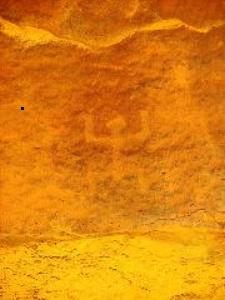 When you think of spectacular Native American ruins, you're likely to first envision the magnificent cliff houses of Mesa Verde, and their cousins in the Four Corners region of the Southwest. But there are less-well known and equally dramatic sites that can be found near the intersection of Utah, Colorado, Arizona and New Mexico, with the grandest to be found in and near Chaco Canyon.

These buildings were constructed at the same time as the cliff houses, but they are more mysterious. While Mesa Verde and the other cliff ruins in canyons throughout the region were clearly once habitations, the purpose(s) of the "Great Houses" of Chaco Canyon is ambiguous. For example, they contain many rooms, like the cliff houses, and the circular kiva chambers as well. But unlike the cliff dwellings, fireplaces and granaries are very few. If they were dwellings, then, where did they cook? And where did they store their food?

Many archaeologists today therefore believe that the Great Houses of Chaco were not full-time dwellings, but rather some sort of cultural centers, acting as gathering places for a more distributed population. This, despite the great size of the buildings, with hundreds of rooms, and their impressive height - some are as tall as five stories. Indeed, the buildings raised by the Chaco culture were among the largest buildings in the world at their time. And like the cliff dwellings, they were all built – and then abandoned - at roughly the same time.

While the exact dates of the great abandonment are conjectural, the construction of these buildings, on a room-by-room basis, is known to the year. This was accomplished in the 20th century through the dating of the timbers used to hold up ceilings, windows and doorframes, using a process called dendrochronology. Here in this dry climate, an unbroken record of years moist and dry (and therefore rapid and meager tree growth) may be found in the growth rings of surviving and preserved timber. By measuring the tree rings of overlapping generations of living and dead trees, an accurate scale has been produced that extends (now) back through several thousand years.

While Chaco is the grandest, it is hardly the most visited of the Anasazi ruins. Not because it is less worthy, but because it is incrementally more remote. The closest airport (and that not a hub) is at Albuquerque, and the roads for the last many miles are clay and dirt. After one of the frequent thunderstorms of summer, the access road can swiftly become slippery and impassable, especially for a non-four-wheel drive vehicle. For those that do come to visit, there is no place to eat or stay, although there is room for a small number of people to camp (bring your own water). Other than the small National Park staff living there to protect and explain the site, there is no one to greet you, and nowhere to stay for perhaps sixty miles in any direction.

But there is the vast sky, the silent walls of the canyon, the sweeping, dry landscape, and the enigmatic ruins themselves. Those ruins are many and dramatic. Over historical times, they have accumulated poetic names like Chettro Kettle and Wijiji, Tsin Kletzin and Kin Klihzin. If you have never seen them (and most have not), you should.

But I have visited Chaco before, and Chaco was therefore not my goal for this first leg of my trip. Instead, I hoped to visit some of the “outlier” Great Houses. These buildings of variously dramatic size are situated in the area surrounding Chaco Canyon, linked by wide, straight roads that can still be picked out from the air. Like the roads (why roads instead of paths, with no horses, or even wheeled carts, to use them?), their reason for being is conjectural. Were they extensions of the Chaco people’s reach, or adoptions of Chaco’s culture by neighboring peoples? No one knows, but with time and, a four-wheel drive vehicle, and the time and willingness to walk, you can visit some of them.

One of the things about the West that appeals to me the most is the fact that you can wander for hundreds of miles by line of sight, limited only by the availability of dirt roads and the presence of public land to give you the right to do so. In the Four Corners area (named for the intersection of Utah, Colorado, Arizona and New Mexico, which forms the rough center of the florescence of South West Native American culture), there are more roads than there is land that is publicly accessible on foot, given that much of the land in any direction is reservation land, including the vast Navajo reservation, that includes the intersection of the states, and borders Chaco Canyon as well. Many other reservations are not far away. And unlike the ranchers of Arizona, lessors of Bureau of Land Management Lands in New Mexico can be cranky – and even hostile – to taxpayers visiting BLM land. This side of the state border, the word “public,” as in “public lands,” seems to be generally regarded as being at best yet another inconvenient truth.

Still, there is plenty of room to move in, and for my first night I was able to thread my way through reservation lands to discover one of the outliers, which can be found on an in-holding of federal land. That Great House is now called Kin Bineola, and lies about 12 miles to the Southwest of the center of Chaco culture. According to the guest log at the trail head, three people have visited it in the last month. 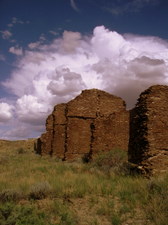 Today, Kin Bineola is still an impressive ruin. But once it was much more, comprising a great, E-shaped building 321 feet in length and, at its maximum, 141 feet in width. It was at least three stories tall in its highest sections, and contained 105 rooms, as well as 10 circular kivas, one of which may have been a three-story tower-like construction. An eleventh, categorized as a Great Kiva, is separate from the Great House, and measures 51 feet in diameter.

Viewed from its long-walled side, the several-story intersections of the walls of Kin Bineola that are strongest, and therefore rise highest, form a silhouette reminiscent of the fallen apses of an abandoned medieval monastery, but for the fact that the finely laid walls of dressed stone rise not from the rich green meadows of an English countryside, but from the arid landscape of the Southwest.

If the ruins of Chaco are stark and grand in their isolation, the ruins of the outliers are defiant. Lost in a sea of yellowed grass, they stand proud on the shallow valley floor in places hard to understand. Why here? Why so high? Why for so long, and then abandoned? With no writings to tell the tale, and almost 1,000 years to dilute any oral history that might have preserved the memories, there is only conjecture. That conjecture focuses on factors such as drought, down-cutting of arroyos, leaving irrigation ditches stranded high above water courses, deforestation, and the possible rise of a cult with a messianic leader that led the inhabitants away.

It is hard today to imagine what motivated these people, among all of the hundreds of other tribes that wandered or farmed the West more than a thousand years ago, as they raised these great walls to the skies. It is perhaps easier to imagine the emotions of their descendants, walking finally and forever away, perhaps to they knew not where, as they looked back over their shoulders and left Kin Bineola to the sun, the winds, and the too-jealous rains.

subscribe to Standards Today – a free eJournal of News, Ideas and Analysis