Okay, so maybe you haven't bought my book.  But that's not Frank's fault, so I couldn't just leave him stranded in the midwest, could I? 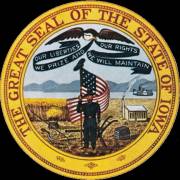 Frank shook his head in disbelief as he turned his radio off. Who could have predicted that talking heads on the evening news would ever look to Fidel Castro to provide a cogent assessment of an American primary season? Frank might be having a hard time starting a non-fiction book about cybersecurity, but thank goodness he hadn’t set out to write a satire about this bizarre election season. How would you parody a parody? All you could do would be to quote the actual candidates. Anyway, that wasn’t his problem.

What he was wrestling with at the moment was what to do when he got to Iowa. Heading to where the political action was had seemed like a great idea when he first turned east. It wasn’t until he crossed into Colorado that it occurred to him that a caucus state would offer next to no opportunities for a hacker to corrupt the voting results.

That left only one possible explanation, and that one didn’t make any sense at all. Or at least he hoped it didn’t. But there it was nonetheless: someone within fifty yards of his camper must have hacked into his very own, personally configured, super secure system.