The latest edition of Linux World ground to a halt in San Francisco today.  I made it into town just last night for a VIP party hosted by the Linux Foundation, where I caught up with lots of true believer friends (developers, journalists and corporate supporters), and for the Board meeting today.  I never  made it to this year's show, though, opting instead to arrive early only to head back out of town for a few days of hiking in the hills south of town.

Or at least, that was the plan.  But as it happened, the best I could manage was a few hiking escapes sandwiched between inconveniently scheduled conference calls, thrashing out some IPR issues holding up the formation of an interesting and unusual consortium I'll look forward to writing about post-launch.  The LF board meeting today was productive, though (a highlight was a walk around the Linux Developers Network Site we brought live today, as well as the new Linux Application Checkerkiller development tool. that Steven J. Vaughn-Nichols immediately pronounced "make ISVs and other programmers start to love developing for Linux."

But to return to the show:  some things never change, it's true, but some of those things that never change do so in ways that are fresher than others.  Linux World, for example, was Linux World, or so I heard from all that attended.  I tried to scan the agenda, and on a fast connection it took forever to load, what with all the dynamic content and fancy graphics.  This year, it seemed, people felt let down, as if the show wasn't delivering the action any more, but just, well, droned on.

But on my way back from the Board dinner, and across the street from where I was staying (Hotel Nikko - full stereo in the room, and a New York Times waiting outside the door every morning - how civilized is that?), I was reassured to find that at least the alfresco, evergreen street scene of San Francisco remains reliably mutable and alive.

In this case, what the street was serving up was music – not just folk or jazz, but a trio of guitar, drums, and didgeridoo.  Yes, that didgeridoo, succinctly introduced by the Wikipedia as, "a wind instrument of the Indigenous Australians of northern Australia. It is sometimes described as a natural wooden trumpet or ‘drone pipe’. Musicologists classify it as an aerophone.." 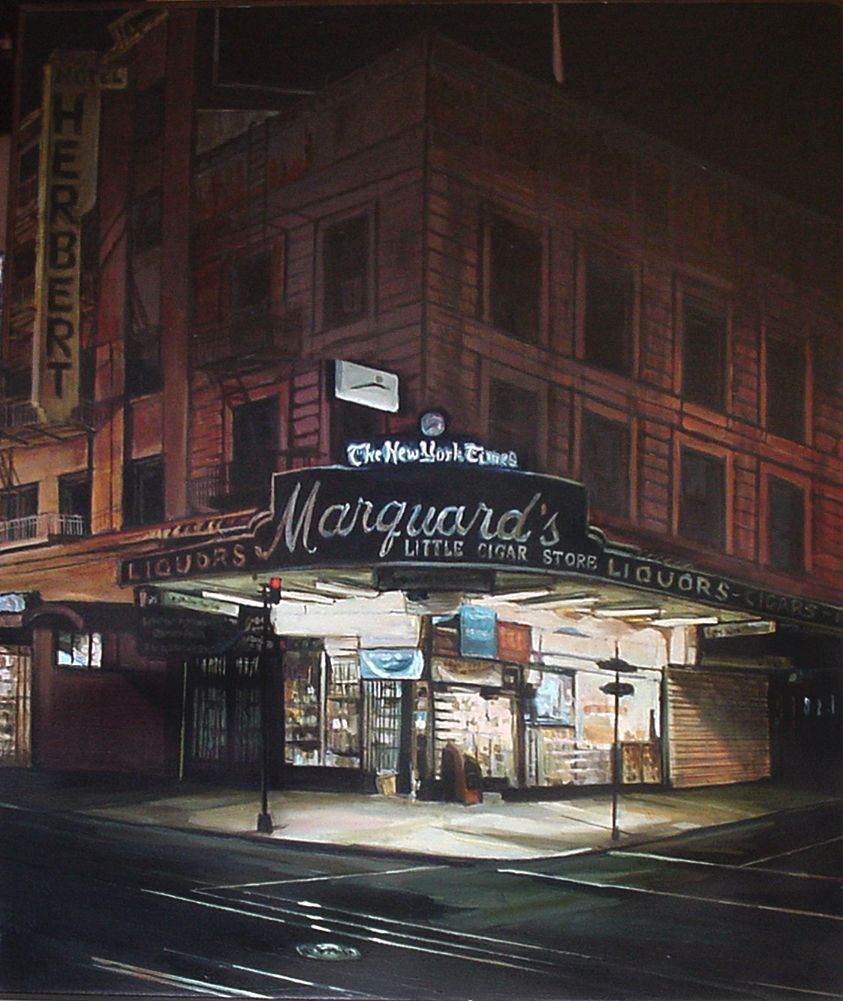 And perhaps a drone pipe it would be in the Outback, a simple tone generator whose purpose is to stay discretely behind the melody and rhythm makers that really move the crowds.  But under the  acoustically nurturing, lovingly preserved Art Deco roof of the night-shuttered building that once hosted Marquard’s Little Cigar Store ("Liquor – Cigars – Magazines; Lids –  Caps  – Hats; Shades of San Francisco"), it was vital and driving, elemental and real.

The crowd was loose, but the musicians were tight – connected, leaning into their craft, swathed in sweatshirts against the cold mist rolling in off the Bay.  The didgeridoo man knelt, legs bent back parallel beneath him without seeming to feel the strain on his over-stretched tendons, ball cap on head and one unconscious hand making random motions against his thigh, the other supporting the pipe that stretched eight feet away from his contorted face, its right-twisting bell resting on the pavement.  At times the sounds he created did indeed drone, but more often they thrummed, urgently, as he traded the momentum of the music back and forth with the drummer or the guitarist, sometimes dropping the pitch of his primal melody to a subliminal register more felt on the surface of one’s skin than heard.

All the while, the drummer drove forward in his own world (as drummers do), legs laced into those of a stool, shadowed face set back deep in the dim depths of his sweatshirt hood, while the Japanese-American lead guitarist, jet-black hair tied high in a knot on the back of his head, played a short-necked electric guitar that would blend into the flow of the music for a time, then rise and power the others onward before subsiding and smoothly ceding custody of their combined energy back again to percussionist or tone poet.

And so the sounds and the energy flowed, up and down and around among them, reaching out to those surrounding them in the dark and the fog and the forgotten sounds of traffic flowing by.  For twenty minutes the crowd grew and moved in place with the music, until the extended jam resolved unexpectedly into the final climactic bars of Pink Floyd’s The Wall.

People applauded, a few dropped money into a box, and some bought one of the anonymous CDs by the unnamed band tucked into plain white envelopes scattered on the pavement ($15 for the factory mottled variety; $25 and you walked away with a hand-painted version).  The band, though, moved immediately into its next meditation without a pause, although they let the crowd relax for awhile, sliding into a loose, reggae beat, making it easier for people to come and go with the pan handlers and the cars and the cabs as the lights changed a few feet away.  People talked and danced, drifted away and drifted in or simply drifted in place, as suited their moment and the mood in the ambient island of music and suspended intentions that had briefly and randomly borrowed their lives on the way from where they had been to where they might be next.

But imperceptibly, the music tightened up, and people paid closer unconscious attention to what the musicians were serving up, talking less and moving more, shifting their gazes fleetingly, and then permanently, from their companions to the musicians.  Some, then more and at last all coalesced into one ribbon of musically focused attention stretching along the pavement between son-of-Marquard’s still dark windows and the dissonant stream of traffic.  And all the while, the man with the alien instrument knelt intently, leaned farther forward, sometimes drumming his throat or fluttering the fingers of his free hand against the side of his cheek, creating an urgent syncopation that energized drummer, guitarists and crowd alike.  People moved in unison as the magnetic music continued to harvest receptive souls of all ages from the street, pulling passersby from all directions to infill the chinks between those recruited to stand there already.  Together, they blocked out the traffic and fog and the chill of the night, and reflected back the ancient, unworldly sounds from a world away that blended with electronically amplified riffs of occidental music and weaved together in ways that were at once primal, new and right.

Until – suddenly – it was over. 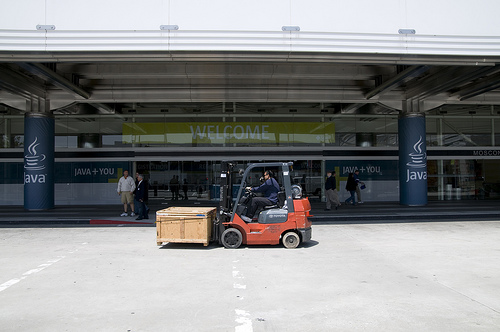 10:00 PM.  Time for the keepers of the peace to trump spontaneity and creativity, even on the fluid and forgiving streets of San Francisco.  Time for the free and the unbounded to cede the stage back to convention and the establishment, and look for adventure in less easily controlled bars and byways.  And so the crowd dissolved, melting anonymously back into the ebb and flow of crowds passing in every direction to points unknown in the night, appetites whetted by the sound of the didgeridoo and hoping for further adventures on the edges of the familiar.

Meanwhile, a half dozen blocks away, the Moscone Center was dark, the Linux World exhibit booths already broken down and trucked away.  The word on the street was that maybe Linux World had run its course and might not be back.  Perhaps Linux itself has succeeded to the point where it no longer needs a trade show to convince the world it needs something that – hey – it’s already using.  Maybe, people were saying, it’s time for a new type of event to help keep the culture and the ecosystem alive, finding its own edge in fresher challenges and newer ideas that don’t rely on familiar ways.

Maybe, it seemed, something different is needed to keep the music alive and the rhythm of revolution energetic and driving, elemental and new, safe from lapsing into the all too-familiar trade show drone.

If you’ve never heard a didgeridoo, you can get a feel for what I heard from this clip at YouTube (you can find many more examples, from traditional to New Age at YouTube).