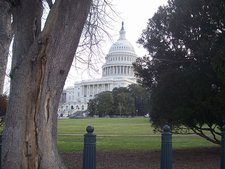 People in Congress have it tough.

They're expected to deal with every new topic that comes down the pike, from regulating securitized credit swaps to beefing up cybersecurity, whether they've had any previous experience with it or not. Of course, there's never a shortage of people who want to educate them, but the "educators" with the greatest access are likely to be lobbyists. And when one paid advocate is promoting one action, political physics dictates that another highly paid individual in somebody else's pocket will be promoting an equal and opposite action. Soon, all potential solutions become obscured by a fog of business propaganda.

What's a poor legislator (and her staff) to do?

Good question. There’s been plenty of fog on Capitol Hill about free and open source software (FOSS) for a decade now, and that’s hardly surprising. In the beginning, most big software companies were a’gin it, and any government agency CIO allowing a useful bit of FOSS to find a home on the servers she supervised was not likely to advertise that fact.

Eventually, some major vendors (like IBM) began including FOSS programs in the systems they were promoting to government customers. But that only made things worse, because other vendors (like Microsoft) went actively on the offensive, initially comparing the theory and appeal of FOSS to that of communism.

With hordes of lobbyists deployed on the ground in Washington and in state capitals throughout the nation, it was soon a brave, and perhaps foolhardy, public IT manager who would dare to take a public stand in defense of FOSS.

And yet, by the turn of the millennium, FOSS was already infiltrating federal and state government systems everywhere. And it was spreading rapidly. When MITRE conducted a two week email survey of FOSS use within the U.S. Department of Defense in 2002, IT manager respondents reported that they were administering 251 FOSS installations that included a total of 115 different FOSS applications. Moreover, MITRE noted that the use of certain FOSS solutions had passed from elective to essential, giving examples that resonate even more forcefully today:

The main conclusion of the analysis was that FOSS software plays a more critical role in the DoD than has generally been recognized….One unexpected result was the degree to which Security depends on FOSS. Banning FOSS would remove certain types of infrastructure components (e.g., OpenBSD) that currently help support network security. It would also limit DoD access to — and overall expertise in — the use of powerful FOSS analysis and detection applications that hostile groups could use to help stage cyberattacks. Finally, it would remove the demonstrated ability of FOSS applications to be updated rapidly in response to new types of cyberattack. Taken together, these factors imply that banning FOSS would have immediate, broad, and strongly negative impacts on the ability of many sensitive and security-focused DoD groups to defend against cyberattacks.

In the years since MITRE performed that study, FOSS usage has spread hugely on all types of government, academic, business and personal systems. In some areas, such as Web server installations, the use of FOSS software greatly exceeds that of all proprietary alternatives combined. Indeed, the use of FOSS is so pervasive that even Microsoft has accepted the reality that its enterprise customers will continue to to maintain mixed proprietary and FOSS systems, and will expect Microsoft to help them maximize the efficiency of these systems as well.

The result is that more and more of the best software developers participate in FOSS projects, whether on their own initiative, or at the behest of their employers. In consequence, some of the best architected, most effectively updated, and lowest total cost of ownership software to be found anywhere is now FOSS. The number of examples of such software continues to grow.

This is good news for the Obama administration, because the President cannot make good on his promises of openness, achieve his technology-dependent policy agenda, reduce the national budget deficit, or protect the nation against cybersecurity threats unless procurement officers actively embrace and utilize the best software available in every case, whether it be proprietary or FOSS.

Increasingly, the best software tool for a given job is likely to be the FOSS alternative. Moreover, choosing a FOSS product — and especially one that fully implements open standards — will better protect the procuring agency from vendor lock-in. It will also facilitate an ongoing high degree of competitive bidding for supporting services throughout the useful lifetime of a product, and provide government IT managers with real-time time access to security and other bug fixes as well.

But will procurement officers always make the best and most informed choice between proprietary software and FOSS alternatives? Too often, government IT managers are subject to vendor pressures, and some (as in Massachusetts) have found it necessary to resign in the face of vendor retaliation. When it comes to FOSS, government CIOs would welcome some long-overdue fog cutting on the Hill. They deserve to know that someone has their back when they make the right procurement decisions for the benefit of the American people.

It’s time for the Obama Administration to publicly state that it whole heartedly supports FOSS procurement by the federal agencies. Not in preference to proprietary software, but on an equal basis. Only by doing so can it ensure that when it comes to getting the best deal for the American public, the best software will win.