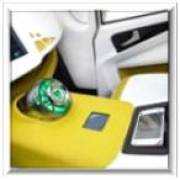 This week a new consortium was launched that may signal who will finally own the last great, unclaimed consumer computing platform – the automobile. The new organization is the Car Connectivity Consortium, and the winner is . . . well, we’ll come back to that a little later. Suffice it to say for now that the fifteen year battle to control the digital future of the automobile could be at an end, and that its resolution may tell us something about the future of the digital desktop as well.

Let’s start by setting the scene. The in-car computing system has been a focus of competitive jockeying ever since computer chips first found their way under the hood, and a lot of the elbowing has been about control. Would cars have a unitary operating system, and if so, would Microsoft or someone else control it? Would the automotive industry control this new opportunity, or would others (e.g., after market vendors) be permitted to share in the wealth? And so on.

Still, why should  the automotive sector buy in to this new paradigm?

As a matter of fact, there are quite a few good reasons. For one thing, cars last a lot longer than technology cycles, and it’s much easier to upgrade the silicon of a mobile device than a chip embedded in a car.   Moreover, the Terminal Mode model can hedge the manufacturers’ bets against an alternative future based not on the size of a mobile device’s flash drive, but on that device’s access to the Cloud.  In either case, the mobile device can be the customer interface that will have to change to adapt.  True, the automotive manufacturers have had to give up any remaining hopes of tying customers to them via proprietary telematic systems, but customers weren’t going to buy into that kind of world anyway – they simply wouldn’t have bought proprietary vendor options and services – and perhaps the cars that offered them – at all.

At the end of the day, the automotive industry appears to have decided to take the classic standards route of adopting a standardized platform, and then preparing to compete on value-added features and services (some of the latter doubtless on a paid subscription basis).  And not only car buyers, but their passengers will be able to interact with the vehicles as well.

Perhaps most importantly, car manufacturers won’t have to compete for the attention of application developers.  Instead, every app that will run on a mobile device should be able to run on a car’s dashboard and seatback displays, assuming that the automotive manufacturer, and the Terminal Mode standard, do their parts.  Absent this factor, it could be years, or never, before a given vendor could offer the kind of entertainment choices in its cars that its customers already get on their mobilt devices.

Will the same approach spread in other directions?  Perhaps. Just this month, Motorola introduced a mobile device/dumb terminal notebook combo to appreciative reviews. The mobile device is the Android-based Atrix 4G, and it plugs into a loading dock with the screen, keypad, extended battery life and trackpad of a laptop – but no hard drive.

So perhaps it is that we have met the future, and that future is the past. Just as in the beginning, when a single minicomputer CPU would support many terminals, the mobile devices of tomorrow may drive many local systems – televisions, stereos, laptops – and cars.  But this time, the entire computing environment will be driven by open standards, and more often than not, by open source software as well.

New Car Connectivity Consortium aims to put in-vehicle infotainment into high gear
Published March 16, 2011
Cross industry initiative: Leading automotive mobile communications and consumer electronics companies join a new consortium for in-vehicle connectivity solutions in standards such as Terminal Mode, NFC and more.
Espoo, Finland – The Car Connectivity Consortium was launched today by eleven companies across several industries, driving global innovation for in-vehicle connectivity, including the "Terminal Mode" standard.
Founding members include vehicle manufacturers Daimler, General Motors, Honda, Hyundai Motor Company, Toyota, and Volkswagen; system suppliers Alpine and Panasonic; and consumer electronics makers LG Electronics, Nokia and Samsung.
With the Terminal Mode standard, the connection of high-performing mobile devices to vehicle-based systems opens up a host of new opportunities for business and a world of innovative applications for consumers. Mobile devices could be tightly connected with in-car systems such as digital displays, steering wheel buttons, rotary knobs and car audio systems. Consumers could use a mobile device via the car controls, as if the device and its apps were integrated into the car itself Terminal Mode is built upon a set of established standards such as Internet Protocol, Universal Serial Bus and Bluetooth.
The Car Connectivity Consortium will focus on further developing the Terminal Mode standard, address certification and branding, and start looking at new promising opportunities for the automotive environment, including NFC and wireless charging. The Car Connectivity Consortium is an open alliance focusing on cross industry contribution. It is anticipated that further leading industry players will join over the coming weeks.
The Car Connectivity Consortium will release its first specification version within the next few months. Several consortium members are expected to present their first commercial products supporting the new standard later this year.
Quotes
"Integrating smartphones in vehicles gives drivers a seamless connected lifestyle experience," said Thilo Koslowski, Vice President Automotive at Gartner. "The automotive industry will benefit from automotive-grade integration solutions that provide robust plug-and-play device connectivity across various brands, hardware and software, while offering safe and differentiated user experiences."
"Vehicles are evolving to be a ‘living space,’ with cutting-edge technology applied. But the life-cycle of built-in car AV system is difficult to match with such fast moving trends and developments in CE/IT products. As we all recognize, the latest mobile devices are equipped with fast internet access, smart features, and more content. And as ‘Car Connectivity’ technology has now emerged, we clearly see the customers’ demands to use the features in Vehicles. LGE expects that the Car Connectivity Consortium can lead future Automotive and IT convergence technology," Said SeungHoon Lee, Vice President, Convergence Lab. at LG Electronics CTO Division.
"Nokia, together with NAVTEQ, understands that people want to use their smartphones everywhere including in their cars," said Floris van de Klashorst, Director and Head of Nokia Automotive at Nokia. "The Car Connectivity Consortium now has the power to turn Terminal Mode into the global standard for the integration of smartphones into vehicles, bringing together the exciting and innovating worlds of mobile ecosystems and applications and with the automotive industry. The industry support we received through the members has been excellent and makes Terminal Mode a truly global effort."
"Due to the wide consumer acceptance of smartphone and apps, Samsung expects that the smartphone will be the dominant hub for in-vehicle infotainment and connectivity. We believe that the smartphone, when connected with an in-car device, will play an important role in providing users with multimedia experience in the vehicle, and that Terminal Mode will be one of the key enabling technologies," said Dokyun Kim, Director, Product Strategy Team  at Samsung Mobile Division.
About the Car Connectivity Consortium: