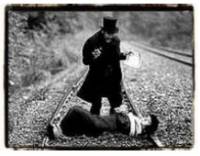 Oh my goodness. It's happening again. Will there be anywhere to hide this time, or are we already trapped — tied like poor little Pauline to the railroad tracks as the engine of another high tech bubble barrels down upon us.

Until last Thursday, there was some cause for hope. True, the day before the New York Times had written a piece reporting on the growing prevalence of "acqhire" transactions. That's where a company (like Facebook) buys a company for millions of dollars, only to promptly shut it down. Why? Because it wants the employees — $500,000 to $1 million per engineer is the current going rate. That's not quite as high as it was during the Internet Bubble years, but the same companies are doing lots of big-ticket acquisitions as well. Whether or not these transactions pay off in new revenues, the dilution to existing stockholders will be the same.

And then there are the valuations. Groupon, which sold its first half price pizza coupon only two and a half years ago, turned down a $6 billion acquisition offer from Google only a few months ago. By April, it was said to be valuing itself in the $15 — $20 billion range. But that was a whole month ago, so the number $25 billion is now in the air. And then there’s Facebook. Goldman Sachs, everyone’s pick for most savvy investment bank on the Street, announced an investment round in Facebook in January of this year at an eye-popping $50 billion valuation. Facebook had revenues last year south of $2 billion.

Still, things aren’t quite as crazy as they were back in the day, back when anyone with a drivers’ license to prove they were under 25 could stroll along Sand Hill Road in Menlo Park or Winter Street in Waltham looking for money. VCs would swarm them like horny johns cruising the Red Light District for a little fun on a Saturday night. Without even asking to see a business plan, they’d throw an entrepreneur $10 or $30 or $50 million for a roll in the hay they hoped might lead to a quick IPO. Hundreds of times, it did, although the same companies were often dead as a doornail a year or two later.

I remember one 20-year-old Harvard student who graced me with a half hour of his time in 2000. He was making the rounds of all of the top law, accounting and venture capital firms in Boston to decide which ones he would permit to work with his new still-to-be incorporated company. Suddenly, he looked at his watch, and stood up. It turned out he needed to jump on his bike and beat it back to Cambridge or he’d be late for his job in the student center mailroom.

And yet, until last Thursday, there was still one major piece missing, and its absence was keeping things semi-rational, at least back here in the stolid Northeast. That piece was the lack of a clear path to liquidity, because the window of the initial public offering (IPO) market for emerging companies has been closed, or barely ajar, since the Great Big Internet Bubble burst in 2000.

And then, on Thursday, it happened. LinkedIn went public.

Wall Street, you see, is not a sophisticated network of brilliant strategists as some suppose, but an extremely highly paid fashion industry

You know LinkedIn — that’s the company that allows people to punch out invites to people they don’t know for reasons they haven’t figured out so they can waste time they don’t have (this is something the business experts refer to as "Social Media." Others refer to it as "another stupid time suck.")

But never mind that. The stories about Groupon and Facebook have been streaming into the collective conscience for a while now, and the fever is rising. Because Groupon and Facebook aren’t available, it’s the perfect tease. With so much hype about the exploding valuations of these two companies, some nominally comparable company would just have to do the gracious thing, and offer itself up to a public desperate for a piece of the action.

For those of you below a certain age, this would be a good time for a short history lesson. What triggered the enthusiasm that grew to madness last time around was the IPO of Netscape, the company that released the first popular Web browser. Netscape was supposed to come out at $14 a share, but at the last minute, the company upped it to $28. Good call. It soared to $75 and closed at $58.25 on its first trading day, giving Netscape a market value of $2.9 billion. The company was 16 months old.

The ones that noticed the most were underwriters and VCs. For the underwriters, this was just another product opportunity to be seized and exploited. Wall Street, you see, is not a sophisticated network of brilliant strategists as some suppose, but an extremely highly paid fashion industry. Every year it "discovers" and sells a new fashion line and touts it as the must-have latest and greatest. One year it will be REITS, the next derivatives. It doesn’t really matter what "it" is, so long as it’s new and can give the machine something to sell. After Netscape, it was Internet startups, and with Netscape to point to, it was easy to persuade the market that this line was hot.

The VCs were another matter. Until then, they had been a relatively sober bunch, running funds that were in the $50 — $200 million range, holding their investments for up to ten years, and hoping to sell or take a few of them public for a yield of up to ten times the original investment. Well, Netscape really opened their eyes — a $2.9 billion valuation in just 16 months!

The problem was, entrepreneurs noticed as well. They weren’t going to sell 40% of their company for a first round investment of $2 million any more. And the VCs didn’t want to make small investments, either. They had been charging 1% a year of the value of fund assets as a management fee, and 20% of the eventual profit. That 1% fee would only generate $1 million on a $100 million fund, and that’s not enough to even keep VCs in BMWs. So in no time they were raising $600 million — $900 million — even $1.2 billion funds — all of which was supposed to be invested in early stage companies. Of course, they raised their management fees, too, sometimes to 2%. On $1 billion, a 2% fee is $20 million. You can live on that.

So it was that the pump and dump cycle bloomed, with VCs stuffing $200 million or more into a single start up instead of $20 million before taking it public. That could happen within a year, and never mind revenues. If you’re looking for revenues, well, you just don’t get the Internet.

My firm and I did very well during those years. But it was a difficult and uneasy time. You had to hire like mad just to take care of your existing clients. And you always knew that when the bubble burst, it would be sudden and ugly. It did, and it was.

You’d like to think that everyone learned something from the last time around. Unfortunately, what they learned most clearly was that you can make a lot of money on the upswing of a bubble, and that you feel like a chump if you don’t get on the bus.

So my hopes aren’t high that we’ll avoid another boom and bust, especially if Groupon and Facebook go public later this year. It’s true that these are real companies with real revenues, and also that we are still recovering from the brutal impact of another bubble that burst after the Internet brought us low. Maybe these factors will keep the froth from getting to thick in the marketplace. Maybe investors will insist on evidence of real value before parting with their hard earned cash. Maybe the reality of bursting bubbles has finally been absorbed.

Maybe. But I wouldn’t put your money on it.