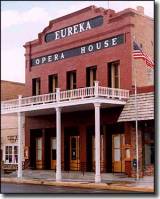 It was only an hour after the helicopter’s departure, but Frank was on the move, driving carefully down the jeep track through the wind-whipped, driving rain, periodically blinded by vivid flashes of lightning. This wasn’t the usual afternoon thunderstorm, where few raindrops survived the long descent through dry desert air without evaporating before reaching the ground. This was the product of a full monsoon front sweeping up from the Gulf, the kind the ranchers relied on to refill their stockponds and green up the grass again for their cattle.

Now that he had signed on with whoever it was that he would be reporting to, Frank was anxious to get started, and he wanted a change of scenery to go along with the new objective. It hadn’t taken long to pack up. But by then the storm was breaking over him.

The jeep track was now a freshet of cascading runoff, and he eased the heavy truck along slowly in first gear until he reached level ground. But the going there was no better, as the red clay of the road had dissolved into a morass of borscht. Thank goodness the camper had high clearance and heavily treaded tires.

The rain continued unabated as he pulled into Eureka, spattered with mud up to the windows. The trip to town had taken much longer than expected, and Frank was getting hungry. Might as well take advantage of an opportunity to get a hot meal out of somebody else’s kitchen for a change, he thought.

Have you discovered
The Alexandria Project?

The epicurean offerings of Eureka being limited, Frank decided he’d try the most hopeful looking alternative, which was the Jackson House Hotel, next door to the restored Opera House. Inside he found a large dining room with a bar populated by a sprinkling of tourists and locals. He took a table against the wall and found a menu tucked between inverted bottles of ketchup and hot sauce.

Frank was trying to decide whether having a buffalo burger was a local attraction to be sampled or avoided when someone appeared at his elbow.   Expecting to see a waitress, he looked up and found to his surprise that he was gazing at a very wet and bedraggled Josette.

“Of course,” he said, standing up, flustered.

“That’s terrible. You must be soaked.”

She smiled bravely and nodded. “I thought this was the desert. So much wind – so much rain! Who could have thought?”

Frank immediately felt protective. He handed her his menu and tried to catch the attention of a waitress.

“Let’s get you something warm to drink.”

The waitress appeared and immediately adopted Josette. Moments later she reappeared with a steaming mug of tea, and a towel as well. Josette accepted both gratefully and mopped her face and hair before studying the menu.

“Tell me, please, what is ‘pork barbeque?’” she asked Frank.

“It’s sort of a shredded meat in a spicy sauce, served on a hamburger bun.”

Josette wrinkled her nose and eventually opted for a southwestern salad in a tortilla shell.

The waitress saw to it that their food arrived quickly, and Josette began to brighten. She smiled at Frank, and he smiled back.

They chatted about this and that while they ate, and Frank gradually became more comfortable. But then Josette asked, “How is your book?”

Frank’s smile faded. “Oh, I’m still doing research. I’ll have to do lots of research before I can actually start writing.”

“Ah! You must be very patient.”

She smiled demurely and poked at her salad. Frank changed the subject. “Were you able to get your bike fixed?”

“Yes, yes! My new front wheel arrived at the post office this morning, thank goodness. Otherwise I would have had to walk back to town.”

“Will you be moving on to the festival now, then?”

“Ah!” She looked downcast. “It took so long for the wheel to arrive. I have lost much time. Today is Saturday, and the festival begins on Monday.” Then she brightened. “But

Frank frowned. Hadn’t this young woman seen any American movies? Surely she would run into some sort of crazy before she made it halfway across the state.

Josette laughed, and then covered her mouth. “You are worried, but afraid to say something!” She laughed again and patted his hand. “Don’t worry! I promise not to shoot you!”

Frank’s ears were burning now. He was too old, too awkward, too out of practice to be having a conversation like this. Josette was young, beautiful, and vibrant. And he was old, ordinary and dull. This was like his first date again. Only worse, because anything he might be thinking he could be sure she was not. And there were certainly things he would have liked to have thought she was thinking. He caught the attention of the waitress and made check-signing motions in the air.

Josette realized she had embarrassed him and changed the subject.

“No. As a matter of fact, I’m leaving tomorrow.”

“Why, I…I’m not exactly sure. You see, I don’t have to be any place at any particular time. I’m just touring – driving where my fancy takes me. I arrive somewhere, stay a few days, and then move on again.”

Josette put her hand on his again. “Then Frank! You must come and see the Burning Man! You will love it! They say there is nothing like it anywhere!”

She reached into her bag, and then pressed an object into Frank’s hand.

Frank stared down at what was now obviously only a toy plastic gun, and stammered,

“No!” louder than he intended. “No, it isn’t that at all,” he continued more softly. “It’s just that I’ve got work to do – I can’t afford to be distracted – it’s too hard to stop and start. I’ve got to concentrate.”

The waitress brought the check. Frank paid it and stood up quickly. He held the door for Josette, and they stepped out under the old fashioned Western arcade.

Frank was anxious to get away, but it was dark, and a steady rain still fell. “Let me drop you off at the motel.”

Josette looked down, and then up into his eyes. “Every place in town is full,” she said softly. “I have already checked. They say it has something to do with, how you say, a ‘rodeo.’”

Frank opened his mouth half way, and then shut it again. Now what? Where could she stay? What should he do – tell her he would be happy to drop her back by the side of the road, in the rain, with no tent? It must be obvious to her that there were at least two beds in a camper as large as his. Damn!

“I guess you could, I mean, I have two beds in my camper. Would you like to stay there tonight?”

She smiled at him radiantly and his heart skipped a beat. “Oh, Frank you are so kind. I do not want to be a bother . . . but what else can I do?”

Frank helped her put her repaired bike in his rack, and her bags in the camper. Josette chattered happily as they began to drive out of town. Behind them, the scattered lights of Eureka glistened wetly in the night – the yellow lights of the Shell station, the upward-cast, white lights that illuminated the letters that spelled “Opera House,” and discretely in front of the motel, the small, red neon sign that said “Vacancy.”

Spread the word!  If you’re enjoying The Lafayette Deception, tell your friends!