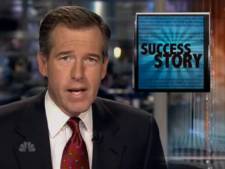 Brian Williams stood center stage in the NBC Nightly News studio, as always impeccably dressed and at ease in a conservative business suit. He shared a last quiet joke with the intern straightening his tie, and then on cue turned to the camera. As always, he read the day’s headlines from the teleprompter with a serious expression. Then, with a warm and slightly wry smile, he alluded to the “Making a Difference” segment that would close the broadcast. As always, he concluded with the signature phrase, “Nightly News begins now.”
His brief pre-recording chore accomplished, Williams strolled to the expansive news desk from which he would orchestrate the rest of the evening’s show. He settled in as the big digital clock on the wall counted down to the 00:00 display that meant Air Time had arrived.

Williams could hear the theme music playing that, as always, provided the bridge between the pre-recorded reading of the headlines and the live portion of the show. Even now, six years after succeeding Tom Brokaw as anchor and editor of NBC’s nightly news show, he listened with satisfaction as a taped voice intoned, “From NBC World Headquarters in New York City, this is NBC Nightly News, with Brian Williams.”  All across America, some 10 million faithful viewers were settling into their couches and chairs as usual to watch the leading evening network news show.

As the last bar of theme music faded at 00:42 on the now reversed timer, Williams looked directly into the camera, ready to read the lead story of the day. Right on schedule, his script started to scroll down the teleprompter, and Williams began to read in an appropriately earnest voice.
Good evening. We begin tonight with the shocking story of how the U.S. Government is hiding the threat of global collapse from the American people.
Anyone paying close attention at home might have noticed that this story hadn’t been mentioned in the introduction. They might also be noticing the furrowing brows on the news anchor’s face as he continued, less confidently than usual:
The danger I refer to is the imminent threat that our government, the military and the financial sector, indeed, all of modern society, will be taken down in one, fell swoop by cyber terrorists or an enemy nation. It could even happen tomorrow.
What the hell was going on here, the normally unflappable Williams wondered. This story hadn’t been on tonight’s script. Could it be that some just-confirmed report had been called in, literally at the last second? Had someone higher up in the network jumped the script to avoid being scooped by NBC, CBS, or God help us, FoxNews? Why hadn’t someone at least slipped him a note, damn it? 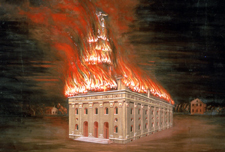 Ever the consummate professional, Williams struggled to prevent his growing anger from affecting his expression or voice. But he was distracted by the monitor next to the teleprompter, which allowed him to see what viewers at home were seeing on their TV screens. It looked like the on-location video screen to his right was displaying a Greek Temple being destroyed by flames. What was that all about?
But the teleprompter scrolled inexorably on. Somebody was going to catch hell for this later, but for now, all the camera-imprisoned news anchor could do was to keep reading.
In a dramatic move to expose this threat, the Alexandria Project announced today that it will radically increase the number of contributions it will receive from the Whitehouse, governmental agencies, major corporations, universities, and news media, beginning with this broadcast – right now.
With that, the teleprompter went blank. Williams found himself suddenly staring at the camera with nothing to say.
Taken aback, he looked away to his stage director, who was staring in bewilderment at the live show monitor. Williams followed his gaze, and saw that the burning temple had been replaced by an image of a tall building – perhaps some sort of ancient lighthouse.  Below it a message glowed in letters that seemed to be etched in flames:
Faced with nothing but a blank teleprompter and a video he could neither control nor understand, Williams used the only line he could remember from his vanished script. Staring straight into the camera, he said, “We’ll be right back.”

All across the country, nearly twenty million other Americans were watching Diane Sawyer on ABC, Katie Couric on CBS, and Wolf Blitzer on CNN struggle, each in their own way, through the same experience. Only on the oxymoronic FoxNews cable channel did the anchors continue to read from their appointed scripts, asking their audience to decide whether they thought it was just a coincidence that “Obama” and “Islam” each had five letters.
Apparently, the Alexandria Project was only interested in archiving shows that reported actual news.
– 0000 – 0001 – 0010 – 0011 – 0100 – 0011 – 0010 – 0001 – 0000 –

George Marchand was not sitting comfortably at home, beer in hand, watching the evening news. He was therefore not immediately aware that the Alexandria Project had made good on its promise to take its campaign for cybersecurity, whether real or diversionary, to the public. Instead, the covert CIA cybersecurity chief was sitting at his desk in the bowels of the Library of Congress when both his desk and cell phones began ringing simultaneously. As he paused to decide which to answer first, he glanced up at his email queue, only to see that new messages with “urgent” icons next to them were popping up like crocuses on the first warm day of spring.

By 8:00 PM that evening, a furious Carl Cummings found himself standing in a cold drizzle across the street from an elegant town house in Georgetown. With Bert and Ernie and just about every other resource – except Carl – suddenly assigned to tracking down whoever might be behind the Alexandria Project, Carl had no choice but to tail Marla in person. According to Bert’s last log entry, half an hour ago Marla had disappeared into the tastefully restored colonial residence with a well-dressed, thirtyish gentleman. Only a single muted light filtered through the closed curtains of an upstairs room. And then that light winked out.

Carl stepped further back into the shadows. He hoped for more reasons than he was prepared to admit that Marla and her “friend” would momentarily reemerge onto the street. Five minutes later, he was still waiting.

Carl cursed under his breath and turned up the collar of his coat as the rain began turning to sleet. It was going to be a long night.
– 0000 – 0001 – 0010 – 0011 – 0100 – 0011 – 0010 – 0001 – 0000 –
Most of a continent away, Frank was approaching Rachel, Nevada. As suggested by Earl Jenkins, he had headed north on his way to nowhere in search of Ponderosa Pines and a secluded place to crack code. A couple hours out of Las Vegas, though, he began to think that his first hot meal in three days might taste a lot better coming from someone else’s kitchen than from one of cans he’d laid in stock for his wilderness mission.
But what the map called Ash Springs turned out to be nothing but a cross roads, and the next dot on the map to the north that looked any larger (though not by much) was 150 miles ahead. So with the sun setting, Frank turned west on Route 375, hoping that Rachel, Nevada might do better by him, at least to the extent of a decent cheeseburger. Had he been looking up instead of down at his map as he accelerated out of his turn, he would have noticed a roadside sign that announced that he was now venturing down, “America’s Extraterrestrial Highway.” 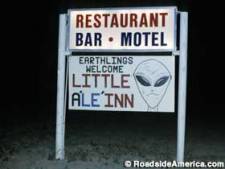 When Frank began braking into Rachel well after dark, the only paved road in town proved to be Route 375 itself. As he motored slowly along, only the lights of a scattering of houses shone dimly onto the road. Not until he was halfway through what little there was to Rachel did he notice any lights that showed any promise of belonging to a commercial establishment. Slowing to a crawl, he read a sign that informed him he had in fact found a motel and restaurant. As he turned into the parking lot, he couldn’t help noticing what appeared to be a flying saucer hanging from the boom of an oversized 1940’s vintage tow truck.
With expectations that could be described as muted at best, Frank switched off the engine and walked across the tumbleweed-dotted parking lot. Not knowing exactly what to expect, he opened the door of what the sign had improbably proclaimed was the Little A’Le’Inn.