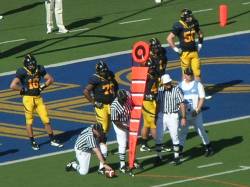 The pace of technology is wondrous indeed. No corner of our lives seems safe from digital invasion, from picture frames to pasta makers. For years now, we have been threatened with Internet-enabled refrigerators, and perhaps 2011 will see it so.

Nor is the process likely to stop there. Soon, we are told, our homes will become infested by "mesh networks" of sensors, each one whispering information surreptitiously to its neighbor, in order to render our lives more energy efficient. But in so doing, they will observe our every move and report it to heavens knows whom.

Indeed, our appetite, or at least tolerance, for this omnipresence of microprocessors seems almost limitless. It should be no surprise then that we have also witnessed the fall of analog, physical measuring devices to a variety of digital replacements. No longer is running a tape measure a two-person job. Simply point the beam of your electronic measure at the wall in question, and zap! — the distance is yours. Doubtless some lonely, rural doctor’s office still contains a mechanical balance scale, but at home our weights are determined by digital pads we can no longer pretend are "a few pounds out of adjustment."

And why not? Digital measuring devices are more precise and as often as not cheaper than their increasingly quaint predecessors. Nor is the defenestration of physical measures of recent vintage. Once upon a time the meter was romantically conceived as one 10 millionth of the distance between the equator and the North Pole. More conveniently, it was demarcated by reference to two marks inscribed on a very limited edition of platinum-iridium bars maintained precisely at the melting point of ice. But since 1960 these charming measuring devices have been relegated to the status of museum curiosities. Now this most central of all measures of distance is determined by reference to (are you ready for this?) 1,650,763.73 wavelengths of the orange-red emission line in the electromagnetic spectrum of a krypton-86 atom existing in an (otherwise) vacuum — a reference with the intrinsic charm of a ball bearing.

There is one instrument, though, that has escaped the inexorable march of progress. That device stands aloof above the fray, seemingly invulnerable to even the suggestion that a better, more digital solution might exist: — the venerable ten-yard chain used to determine "first downs" in every professional, collegiate and high school football stadium in the United States.

And venerable it is, with antecedents harking back at least to the ingenious surveying chain introduced in 1620 by Edmund Gunter, which employed 100 links, each exactly 7.92 inches in length, and comprising 66 feet in all. This simple device remained in use until the latter half of the 20th century until it, too, was relegated to the ash bin of history by a high tech device (the theodolite) Today, Gunter’s Chain is but a memory, save for one important remaining datum: 66 feet continues to define the distance between the wickets in the sacred game of Cricket.

In matters of love and war (and certainly sports), the pragmatist can easily see that finality trumps accuracy every time

But this is an essay about an American sport, and not an English institution. Still, a few words of introduction would be appropriate for the benefit of those readers for whom a football means an object spherical rather than ovoid. Happily, the rules of American football are extremely simple.

To begin. In order to retain possession of the ball, the offensive team must advance more than ten yards towards the opponent’s goal. Moreover, it must do so in four plays (unless it has elected to kick, rather than "make," on the fourth down, provided of course that the kick is a hearty effort rather than some devious "on sides" effort intended to permit making the ten-yard minimum anyway, but never mind). The ten yards is measured from the point at which the team took possession.

The ten yards is determined in one dimension (along the upfield/downfield axis) from the exact point at which possession of the ball was obtained by reason of the opposing team having failed to advance the ball by ten yards (as compared to taking possession through a kick return or interception, which of course is quite a different matter entirely, in which case the starting point is the point at which the ball carrier was tackled or was forced out of bounds. Savvy?) The nether terminus of the measure is the exact point on the field at which the foot ball is determined by one of the game referees to have been "downed," marking the end of the play, also called a "down." That is, assuming that the defensive team has not intercepted the ball in the course of the play. All quite straightforward.

The field is divided from side to side by chalk lines at five yard intervals, and lengthwise by two lines of one-yard hash marks, thereby providing spectators with ready and simple reference points throughout the game. But with such incredible stakes riding on the results of every game (what stakes exactly? If you need to ask…), a more exact means of measurement is of course required. And that’s where the linesmen and their ten-yard chain come in.

The chain, properly so called, is more than a simple length of links. Rather, the device also includes two upright poles (the "sticks), commonly jacketed in bright orange padding, between which the ten-yard chain can be stretched . By placing the tip of one pole at the point at which the ball lies when a team first takes possession (the "line of scrimmage), the ten yards to be attained can clearly be indicated in advance, and measured in the breach.

In near cases, the chain crew (inevitably referred to as the "chain gang) runs out onto the field with sticks in hand and chain in tow to place one end at the starting point for a play series, and the other adjacent to the ball, which is inevitably surrounded by milling players, anxious to learn the result. As the chain gang plants their poles and the referee stands by the ball, arms akimbo, the crowd awaits the verdict, hushed and breathless. A moment later, the referee signals the result, and simultaneous roars of triumph and tragedy are hurled from the stands, to intermingle above the field as the players disperse, providing a clear, first hand view to all in attendance. For the implacable, unwavering chain cannot lie, and even in a stadium packed with thousands of ardent fans, the mid-line of a football can be seen. From the comfort of a living room sofa, the evidence is irrefutable.

Therein doubtless lies the secret of the survival of the quaint but unimpeachable first down chain. As accurate as a digital device that any 12 year old geek could throw together after a visit to the local Radio Shack? Hardly. But in a world filled with chicanery and inhabited by fans more rabid than rational, the utility of a measuring device that can be seen in action, and therefore believed, has doubtless prevented many a fistfight — or worse. In matters of love and war (and certainly sports), the pragmatist can easily see that the value of finality trumps accuracy every time.

So it is that this January 1, as on every New Years Day that has come before, American males will once again assume the couch position and watch frozen players heave footballs through snow squalls in locations that no sane spectator would choose to site a sporting event, much less willingly inhabit for four hours in a 20 mile per hour icy wind. What they will watch will be more than just a game. Yea, they witness the perennial triumph of the American Way through the visible, democratic exercise of a simple ceremony that respects the hopes and fears of both teams, and ultimately leaves all concerned satisfied with the justice, if not the outcome, of the call.

And you know what? There’s just no app for that.