After ten days of staying off the beaten track in Arizona and Utah, I decided to make an exception and visit a few of the slot canyons for which this part of the country is justly famous. Like many other visitors to the Grand Staircase of the Escalante National Monument,I chose Dry Forks Coyote Gulch, a drainage in the southeast corner of the Monument, into which three slot canyons empty in rapid succession: Peekaboo, Spooky, and Brimstone. 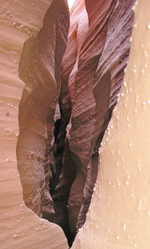 Upstream of where the trail enters, Dry Gulch itself becomes a slot canyon that can be followed for miles. Anywhere else, it would be an attraction in its own right, but its easy, winding path pales in comparison to the drama of the serpentine, and sometimes almost impassable, corridors of its more famous tributary slots.

Although I had not seen a soul in a week of wanderings in the Escalante, there were already three vehicles at the trailhead when I arrived early in the morning; there were three more by the time I left. And no surprise, because each of the slot canyons that can be accessed less than a mile from the trailhead is spectacular in its own right.

Like most visitors, I scaled Peekaboo first. The canyon enters from the north, emerging as a narrow cleft ten feet up the stone wall of the main canyon. After clambering up (using handholds) the canyon wall, and then up and over a modest pouroff, you work your way gradually uphill for .25 miles, past fins, dry whirlpools and modest pouroffs, looking up on occasion through arches that span the narrow canyon. At times, you need not only all of your arms and legs, but your back (and some ingenuity) as well to span, brace and lift yourself up and over obstructions. Eventually you emerge into the gravelly wash above, from which it's less than a half-mile hike due east to reach the next wash, which almost immediately dives down into the bedrock to form Spooky - the second slot canyon.

Spooky is more consistently narrow, and requires traveling sideways for much of its length, your hat brim scraping each side of the canyon, and your shoulders of necessity kept parallel to the rock faces of the canyon walls. I’m six feet tall and weigh 170 pounds, and had only an inch or two to spare as I sidled through some stretches. Consequently, prudence is advisable in deciding how far to proceed if you measure much more than I do, front to back. After all, as one on-line guide dryly phrases it, “It is very difficult to extract hikers who become stuck here.”

Prudence is advisable in other ways as well. Needless to say, a slot canyon is no place to be when there is a thunderstorm uphill. And one should never go down what one may not be able to get back up. The classic example of an obstacle that can lead to grief is a pouroff — a sudden, vertical drop in the floor of the canyon, where the water has cut through a hard layer of rock and rapidly eroded a softer layer beneath. It’s fine to drop down such a feature if you know that you can make it all the way through and out the bottom of a canyon. But if that proves not to be feasible, a matter of a few inches in height of a pouroff can be the difference between being able to exit where you came in and being trapped below the pouroff — as someone was in the Escalante earlier this year for more than a week. I expect it got tedious waiting that long to be found.

Spooky, like Peekaboo, was appropriately impressive, and I took the requisite number of pictures as I worked my way through each. Narrow, beautiful, difficult enough to be interesting and easy enough that technical equipment is not required, outfitters like REI might someday think about adding a recreation of one of these canyons to their stores after climbing walls become passÃ©.

And therein, of course, lies the rub. These canyons are so well known and described that you might as well be at your friendly neighborhood outfitter. Before entering each canyon, you know exactly how long it is; where the tight places are; the fact that you should be able to make it through Peekaboo and Spooky but will have to turn back in Brimstone; that it’s easier to go up Peekaboo and down Spooky; that people of more than modest girth will not be able to make it through Spooky; and anything else you’d care to know from any of a dozen books and many times more Web pages.

And, of course, you’ll have company along the way. I expect that some day the Bureau of Land Management (which administers the Monument) will designate one canyon to be used only for ascending, and the other for descending, as it is impossible to pass by someone through so much of the length of each.

What’s missing as a result is any sense of adventure, or surprise, or mystery. Instead, there is a reliable “experience” that anyone can evaluate in advance and select from the menu (or not) after comparison-shopping among the other “experiences” available for the asking. As I descended Spooky, I noticed that someone with a sense of humor and perhaps the same reaction had placed a small cairn of rocks halfway through the slot. Such cairns, of course, are used to mark a faint trail to help people avoid getting lost — not even an option under the circumstances.

It seems to me that there is something wrong with this type of picture, or at least a picture that includes only such pre-packaged experiences. Perhaps it’s illusory to pretend that wandering anywhere in America at this point in time is really any more adventurous, given that every square foot of the country has been stolen from its original owners, mapped, trampled, grazed, and sold multiple times. But there can still be surprise and some degree of mystery when you stumble on something pleasing and unannounced.

As I did later that day, when I stopped towards sunset elsewhere in the Monument to circumnavigate a butte about a mile off to the side of the dirt road I was on. There was nothing particularly memorable about this particular feature, other than the fact that it presented itself at the right time of day to tempt me, and was the type of classic, redrock prominence that you think of when you think of the Old West. A couple hundred feet tall, it was surrounded by an undulating apron of light gray slickrock, calicoed with bands of eroding clay from which sprang ancient junipers, many more dead than alive, each contorted and weathered to a pearly gray. Some were almost completely dead, holding out a single, improbably green branch in defiance of the fate suffered by the remainder of the tree.

While the sun lowered in the sky, pinyon jays called and played tag in the junipers, and ravens croaked from the fragmenting heights of the butte. When I began to circle the butte, I hiked up and down over the fins of clay, and then out and around on the skirt of slickrock on the backside of the butte. At length, I noticed the top of an arched alcove carved in a grey undulation of the apron that rose a bit above the rest, and turned my steps in that direction. The closer I came, the more alcoves I saw, arising in a line, one after the other, like the vaults of a cathedral along the sides of a narrow, pocket canyon that seemed to open up magically from nowhere like Shangri-La, its walls subtly but beautifully banded with the layers of rock from which it was composed.

There were twelve alcoves in all, each describing an almost perfect arc. The three at the head of the canyon flowed together under a single overarching alcove, like the apses behind the altar in the curved end of a sanctuary. In one, a tall juniper grew precisely centered, standing tall and perfectly framed, like the statue of a saint.

Inside the canyon — perhaps two hundred and fifty yards from end to end, and not much more than 100 feet across — oaks, maples and pines grew in the cool shade of the vertical walls that rose on every side. At the foot of the canyon, the walls turned abruptly in a right angle, shielding the canyon from view from that direction. Only by walking the right way across the apron of stone — or by flying like the ravens overhead — could the alcoved canyon be found at all, and then only at the last moment and when nearly past. All was silent and peaceful in this natural cathedral, as the sun set, the shadows lengthened, and the stars began to emerge above.

Was I the first to stumble upon this canyon of alcoves? Of course not. But nowhere, to my knowledge, is it described or defined other than as a small knot of elevation lines on a detailed topographical map, and therefore it can only be found and enjoyed by happy chance.

The likelihood of finding such a small treasure on any given hike is naturally not great. But the pleasure of the discovery when it does occur more than makes up for the long odds. For my money — or time, to be more precise – I’ll take those odds rather than place my bets on the enjoyment to be gained by visiting any of the prepackaged, precisely described and predictable features that have become as much destinations and attractions as examples of natural beauty.

And no, don’t ask me where the canyon of alcoves can be found. You’ll have to go looking for it — or something equally rewarding — on your own. You may find that the odds are better than you expect.