Skip to primary content
From time to time I take a break from technology blogging and write about backcountry hiking and camping. This is one such entry, and you can find others at the Not Here but There: a Wilderness Journal. 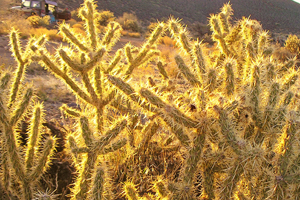 The next morning, the dawn sun shone obliquely through last season's dead grass, igniting the silica in the dried stems, making the dry slope above my campsite gleam like a meadow after an ice storm. The welter of needles worn by Cholla cacti blazed more brightly, as if invested with St. Elmo's Fire rather than simply catching the brilliant light of the rising sun.

When I had stowed my gear, I drove north to St. George, the first town lying across the Utah border, to gas up before heading south again. St. George is exploding with growth, and seems like nothing so much as a piece of southwestern Florida somehow transported by night into the middle of the desert, there to open its eyes with surprise, blinking, in the bright sun of the new day.   The town is sourrounded by new construction, and each upscale, impeccably landscaped development is graced by its own substantial brick Church of Latter Day Saints house of worship, complete with tall white steeple.

Across the valley in the older part of town you can't help noticing a much grander temple, the oldest LDS church in Utah. Brigham Young broke ground for it himself in 1871, and even today it rises high above everything that surrounds it, commanding the valley.  The swampy ground upon which it was built was supposedly "packed with volcanic rock using a cannon — first employed by Napoleon during the French Revolution — as a pile driver. The temple itself was constructed using timbers hauled by oxcart from the ramparts of Mount Trumbull, 80 long miles to the southwest, along a dirt track I drove a few hours later. 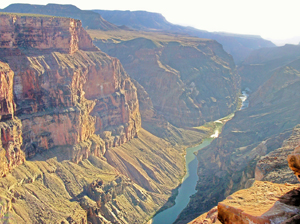 But today, new business areas and an industrial park are rising everywhere around St. George that houses aren’t.  The new commercial buildings are filled with copy centers, building supply centers, and other businesses serving the rapid growth that is itself being fed by I don’t know what. Presumably nothing more than retirees seeking a place in the sun.

It was in the back of the industrial park that I found the dirt road I was looking for to take me south, out of town and south to the Colorado River. This road – the same one used to haul the temple timbers and still called the Temple Trail – was unmarked and half-blocked by orange traffic cones. It looked forlorn and forgotten, epitomizing how completely the latter day inhabitants of this booming, modern Mormon town have turned their backs on the desert their forbearers had so improbably and bravely challenged not so very long ago. No one seemed to be using the road now, except to trailer their dirt bikes and ATVs just beyond town.  There, they could assault dessert hillocks glittering in the sun with an infinity of broken bottles.  This close to the Nevada border, these containers doubtless once contained a real brew, and not the villainous, 6.4 proof excuse of a beverage that Utahans in the interior must pretend to call beer.

Just a few miles outside of town, nothing lay ahead but the single lane of the dirt road, modest mountains running north to south, broad ranchland valleys, and eventually the Grand Canyon itself, snaking from east to west sixty miles distant.  Officially, this area became the Grand Canyon Parashant National Monument on January 11, 2000, courtesy of one of the last official acts of President William Jefferson Clinton.  The proclamation that established the Monument recited many natural features and qualities justifying this action, including the following:

Fossils are abundant in the monument. Among these are large numbers of invertebrate fossils, including bryozoans and brachiopods located in the Calville limestone of the Grand Wash Cliffs, and brachiopods, pelecypods, fenestrate bryozoa, and crinoid ossicles in the Toroweap and Kaibab formations of Whitmore Canyon. There are also sponges in nodules and pectenoid pelecypods throughout the Kaibab formation of Parashant Canyon.

In this and other, equally dry paragraphs, the proclamation placed the vast area within the ambit of legislation passed in 1906 that "authorizes the President, in his discretion, to declare by public proclamation historic landmarks, historic and prehistoric structures, and other objects of historic or scientific interest that are situated upon the lands owned or controlled by the Government of the United States to be national monuments."

But to begin with, the countryside was simply pleasant and unexciting, offering few temptations to slow me down short of Mount Trumbull itself. From thence forward, the terrain became more rugged and interesting, until at last I reached the canyon rim itself, in one of the few places for hundreds of miles where it can be apporached by car from the north. 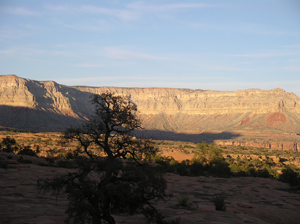 Although early in the day, it was hard to complain about the scenery that rewarded me at my destination. That said, it’s impossible to comprehend the immensity of the Grand Canyon on a first, or even a second or a third glance. The reality of so much dramatic detail extending so far into the distance demands contemplation – otherwise, it overwhelms and refuses to properly register.  To grasp its full grandeur therefore takes time, and for that reason, if for no other, the opportunity to camp on the edge of the Grand Canyon is priceless.

Twilight is the best time to begin to understand the Grand Canyon in all its majesty, as then it becomes especially eloquent.  As the sun approaches the horizon, the colors of the cliffs begin to change and glow, and the temperature drops a degree every two or three minutes as the shadows creep deliberately into the east. The stillness is vast, interrupted by nothing at all except the silent calls of bats, smaller than sparrows, that appear each night as the stars return and the canyon dissolves into the dark of the night.

Hours pass.  Then, the half moon rises, and the canyon materializes once again out of the void of the darkness.  Now, it is awash in a cool white light, a timeless study in shadows, its cliffs and plateaus melting endlessly into the distance, held in the calm embrace of the silence of the night.