Skip to primary content
From time to time I take a break from technology blogging and write about backcountry hiking and camping. This is one such entry, and you can find others at the Not Here but There: a Wilderness Journal.
Returning from my first Linux Foundation board meeting ten days ago required a flight change in Las Vegas, and this gave me an excuse to invest a few dollars renting a Jeep Wrangler and a few days exploring northwest Arizona. My favorite pastime is poking around the parts of the US whose maps reveal neither towns, nor even paved roads. This is one of the last such areas I haven't already explored, and it goes by the name of the "Arizona Strip." 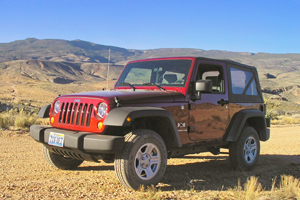 The first part of the name explains itself, given that most of the area lies in Arizona, although in fact the Strip extends up into southern Utah, and a bit west into Nevada as well. The feature that explains its emptiness is the nature of its border to the west and the south: the Grand Canyon – a gulf that along this lengthy stretch has not as yet been (and I hope will never be) violated by a bridge or adjacent highway.  In consequence, you can only reach the Strip from the north and east, and only then via one of a small number of dirt roads. For that matter, there's not much to be found to the east, either. Only to the north are there any towns at all.

The emptiness of the Arizona Strip is also due to the fact that it is almost exclusively public land in all of the popular western flavors (National Park, National Monument, State Park, and the balance under the supervision of the Bureau of Land Management). At its greatest extent, the Strip is 150 miles wide, and almost as many again from north to south, and nowhere in that vast expanse can you find a single paved road. No paved roads, and no towns, gas stations or even running water, either  –  but a great deal of quietly (and often spectacularly) beautiful country can be enjoyed wherever you go.

Unlike the Kaibab Plateau to the east, which stands from 7,000 to 9,000 feet above sea level and is blanketed with ponderosa pine, aspen, and conifers, the Arizona Strip only rarely rises high enough to host trees of any real stature. Where the land is sufficiently elevated to support any vegetation more ambitious than brush, it is rarely loftier than juniper, and somewhat higher up, pinyon pine, neither of which has commercial value except as firewood and as a source of pine nuts for gourmet stores.
As a result, the Kaibab has been made accessible by a network of excellent dirt and gravel logging roads, capable of supporting the heavy trucks that haul out the timber that is harvested from this government land. But in the Strip, there are only ranches. The few dirt roads needed to support the cattle trade are more elemental, intended mainly for pickup trucks.  And they are both few as well as far apart. Cattle, after all, are willing to carry themselves part way to market on their own innocent hoofs, and can be collected from the stock tanks they must visit on a daily basis. Tall timber is less cooperative. Logs can be dragged by heavy skidders only a short distance, because harvesting regulations and the costs of restoration dictate quick transfer to a more suitable mode of carriage to the mill. But the Kaibab is nonetheless a beautiful place, and I visited it last August (you can read more about it at the entries dating from August 21 to August 23, 2006).
But to return to the here and now. I left route 15 just not far inside Arizona on my first day, and then meandered south on a dirt 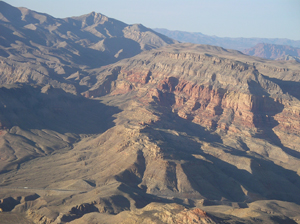 road, winding on ranch tracks back into the hills until I came to a sign announcing that the road ahead was closed for the winter. Assuming this news to be advisory rather than determinative, I continued until the road cut a tight corner into the hill, where I was confronted by a large and authoritative boulder standing proud in the middle of the dirt track. Its message – You Shall Not Pass – was unequivocal.  No one was going to go further on that road until the bucket loader that had placed the boulder there in the fall returned to remove it again come time for spring maintenance.
But that was all right. I had no set destination in any event, and in turning around I noticed three wild horses that had escaped my notice before, grazing on the hillside above. Backtracking, I turned onto a road earlier not taken. It led me to the west, and into a pastel landscape just beginning to brighten with the colors of spring. Anywhere you might look across the broad panorama of mountains and cliffs, ravines and flats, a delicate impressionist expanse of brightening green ephedra, sage brush in its first blush of purple, and pale green agave colonies was splashed across the red clay soils and occasional brown swathes of lava cinders. Not long after, I saw six mule deer, a lucky buck with a big Y rack and five does, up against a cliff and grazing calmly on the forage that grew on ledges too narrow for the less sure-footed and more bulky cattle to venture upon. I watched the deer, and they watched me, and since I had less urgent business in that place than they, I was first to moved along.
Eventually, the winding dirt road took me up to summer grazing land, thick with juniper and pinyon pine. But it was much too level there to be very interesting, and I found little to attract my attention, other than a slab of petroglyph-inscribed stone, co-opted to serve as the terminal support of a cattle loading chute. So back around I wandered once again. 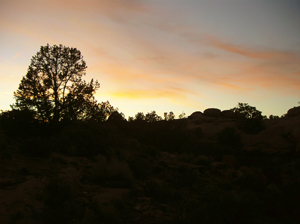 A thousand feet lower in elevation, I found a high, lookout type of place where I could spend the night surrounded by celestial splendor. But as the sun began to set, a strong wind kicked up, making it a poor and exposed place for sleeping without a tent. Farther down, a cove set into the mountain side provided better shelter from the wind, and almost as fair a place to watch the sun set and the stars emerge.
As it happened, many of the planets became visible at some point during the night, with Venus ruling the twilight, brilliant and clearly round. The third or fourth star to appear was revealed to mark the head of Orion, as two stars, and then a third, became the hunter’s belt, just short of midway between his head and another star that resolved into his foot. As if removing a mask, another star became the tip of his arrow, drawn and ready, but never actually to be let fly. Before I turned in for the night, so many other stars emerged thereabouts that the hunter had became indistinct, camouflaged by the cloud of stars that had emerged around and within his outline.

All in all, a fine way to begin a few days somewhere that could seem so appealingly far away. Strangely, the part that remains with me most today is watching not the setting of the sun, but the slow descent of Venus until it hid itself, at last, below the horizon. Til then, it shone almost as brightly as does the moon in the light-polluted night sky back east, where I would never have found the time to pause and do nothing, but simply enjoy the sight of so beautiful a goddess float serenely in the sky, and gently sink from sight.

For more selections from  Not Here But There: A Wilderness Journal, click here