First, let’s do a brief review of what this exercise is all about.

For some years now, I’ve been investigating and reporting on the various promotional avenues available to authors. Almost all of them are time-consuming; some of them can be very expensive; and very few of them work – sometimes at all. One of the most hallowed of these methods is the free giveaway. So well enshrined is the freebie that the ability to run free sale days is considered to be one of the prime benefits of enrolling your book exclusively in the Kindle Select program.

And at one time it appears that free sale days were highly effective. But are they still useful today? Determining the results is what these two essays are about (you can read how and where the promotions ran, and what they cost, here).

An important aspect of any promotion is being clear on your goals. Another is being sure that you can measure your success to determine whether the effort is worth repeating. For a free promotion, an author may want to achieve one, or more likely all, of the following:

The types of data you would use to measure success are rather obvious, although an author’s real-time access to the information needed may be limited, depending on how her book is distributed:

If your books are enrolled only in Amazon Select, then your monitoring will be quite simple. The best measure will be your Kindle Author Dashboard report, which provides charts and figures for the number of copies you’ve sold and the number of pages that have been read. Strangely, the Kindle dashboard updates much more quickly and more often than your books’ Amazon ranks are calculated and posted (the lag seems to be at least six hours). That said, it still takes some hours between the time that a copy of your book is sold or a page is read before the results show up in your dashboard

If your books are in other distribution channels as well, then you will only be able to assemble your comprehensive results as they become available, either site by site, if you have uploaded them yourself (e.g., at Apple iTunes, Google Play, Barnes & Noble, Kobo and so on) or in a single dashboard, if you’ve used a distributor, like SmashWords or Draft2Digital. The speed at which sales figures make their way to these distributors will vary, as will their own times and frequency of updating your account.

Either way, Amazon will likely be your best tool for measuring your success, since the significant or great majority of your sales will usually be through Amazon. Since what you’re looking for is magnitude of response rather than exact figures, this will be more than sufficient.

So with that by way of prelude, two and a half weeks later, what were the results of those 4,360 downloads, as measured by the success criteria listed above? Let’s take a look at sales first, using my Kindle Dashboard charts.

Before we get too excited about the big spike on the left (peaking at 122 sales the day after the free promotion ended), it should be kept in mind that many people probably didn’t get around to reading their book promotion email newletters until the next day, by which time I had raised the price to (only) $0.99.

Since all of the promotion emails included discount as well as free books, there would have been little disincentive to buy the book after it went from free to $0.99. So we can’t count those sales as being a follow-on effect of the promotion – they were a direct result of the promotion itself. It’s possible that some of the sales might be a result of the time my book spent in the #1 spot on the political and thriller lists, and half way up in the Amazon All Free Kindle Books list.

Unfortunately, we also can’t credit those spikes to the right to the free promotion, either, since they occurred on the days that I ran discount sale promotions (I’ll report on them in a future post).

Now let’s take a look at Kindle Page reads, which presents a different, but equally important, set of data.

The first thing I learned from this chart is that people read a whole lot more on weekends than they do on weekdays. I’d like to think that it might also mean that some people read my book straight through, but unfortunately, there’s no way to tell  whether your book riveted a few people, or disappointed a much larger number.

Either way, one take away from this chart is that running a sale (or a discount) on Wednesday – Friday, rather than during the weekend itself, is a good idea. That way your book will be top of the mind when the opportunity to settle in with a good read arises. Another reason is that I was informed by one of the best services that downloads are lower on Saturdays and Sundays, presumably because people are otherwise occupied and less likely to be on-line.

While the chart looks impressive, it’s less so if you can see the numbers. Added together, they show about 8,000 page reads since the sale. Since the book is 330 pages long, that means that only the equivalent of 24 books have been read cover to cover. How good or bad a percentage of all downloads that might be is impossible to tell, since Amazon doesn’t report how many downloads enter these programs – only how many pages are read after they do.

To put the results of the free give away in perspective, here’s another page reads chart, this time showing page reads over the lasts 90 days:

Clearly, the free promotion increased reads. But whether those reads will continue to build, or start to fall off remains to be seen. If they continue to rise, I expect it will be increasingly likely that they will be the result of word getting around that the promoted book is a good read rather than that Kindle owners are stumbling on an old free download.

The last relevant chart relates to sales of my original book, The Alexandria Project, the first three chapters of which appear at the end of the free download. Did they enjoy a boost?  Let’s see. 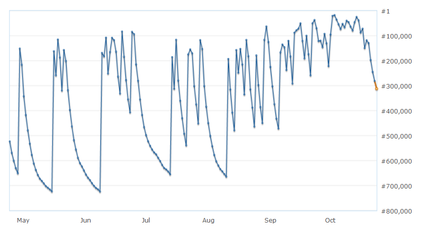 This time, the chart shows the Amazon Sales rank for the book, rather than the actual sales, because I’m in the process of getting the files back from the original service and publishing them myself. But that’s okay, because we’re measuring impact here, not exact sales.

The second thing to note is that my first book enjoyed about two and a half weeks at its highest sales rate ever before beginning to fall off again. These sales appear to be a direct result of the exposure the book enjoyed indirectly from the free promotions.

Now that we’ve taken a look at all of the available data to date, what can we conclude about the value of the free promotion, as measured against the goals we listed at the beginning of this report? Let’s see.

Goal one: Achieve more visibility and buzz for the promoted book

Result: Minimal, to the extent the results can be measured

Goal two: Getting a large number of people to read the book

Result: The most likely answer is that, so far, at least, the number of people reading the book is modest. The number of Kindle pages read indicates that there has  certainly some positive result, but without knowing how many of the books were downloaded by readers in the necessary Amazon programs it’s not possible to tell whether the data indicates a good result (few of those who downloaded the book were enrolled) or a bad one (many were)

Goal three: Getting more reviews for the book, especially at Amazon

Result: None to date

Goal four: Boosting the sales momentum for the book

Result: Average sales soon dropped to 0 – 2 a day; about a one book a day positive difference from the rate before the promotion

Goal five: Selling additional books, often in the same series, to the readers that downloaded a free copy

Result: There has been a meaningful, although temporary, improvement in sales of my first book

While it’s possible that there may be ongoing benefits from having those extra 4,360 books somewhere out there on peoples’ Kindles, phones and iPads, it’s clear that the near term benefits of the promotion have been very modest at best. It also needs to be kept in mind that I’ve run several less extensive discount promotions since the free campaign, so some portion of the results summarized above are certainly attributable to those efforts instead.

Obviously, an experiment with a sample set of one is anecdotal at best. However, the results observed are consistent with what I hear from other authors. Assuming that my data are representative, what should authors conclude? Here are my suggested takeaways:

Sadly, it seems as if there are very few silver promotional bullets available to authors. Another blank, incidentally, is blogging about writing to promote a book. Over 1,000 people read Part I of this series here and at my other blog in the first three days after I posted it. During the same period, I sold a total of 6 books, which is only the average current sale rate.

If you enjoy a good thriller and have found this and the prior installment valuable, you might consider trying one of my books, or sending one to a friend. You can find them here. I’ve temporarily lowered the price of The Lafayette Campaign to just $0.99.

Coming soon: A detailed review of costs and results of discount promotional services.

Have you joined The Lafayette Campaign?