Economic downturns have a tendency to accelerate emerging technologies, boost the adoption of effective solutions, and punish solutions that are not cost competitive or that are out of synch with industry trends. 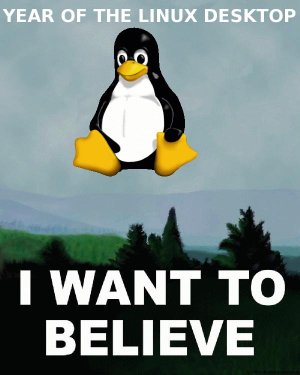 So begins a new white paper from research analyst IDC.  History supports the logic of the statement, but applying the same logic to predict the future is a dangerous game.  Having good starting data can help considerably in that regard, though, and that's what makes this report interesting.  Its title is Linux Adoption in a Global Recession, and it marshals some impressive data to predict that Linux will be a significant gainer, while others are punished by the current global meltdown.

The report bases that conclusion in part on its finding that: "Linux users are clearly satisfied about their choice to deploy Linux, and during trying economic times, the potential for those same customers to ramp up their deployment of Linux is strong."  In other words, unlike the last recession, in which the free OS had to establish itself in environments where it had never been deployed before (its market share increased dramatically anyway), this time it need only increase its beachhead among existing users in order to post impressive gains.  But IDC predicts that it will also do quite well with new, missionary sales as well, promising that this time around, its competitive position should strengthen as well as broaden - including on the desktop.


Let’s look at the facts first before taking a deeper dive into what the report has to offer.

Methodology:  The IDC report was commissioned by Novell, the second most successful commercial distributor of Linux.  The report states, however, that Novell did not participate in the selection of the respondents, and that the response sample was not limited to Novell customers.  Also, only organizations with existing Linux deployments were surveyed (97% of the responding organizations, however, run Windows as well).

The 330 organizations surveyed were geographically dispersed, including Western Europe (78), the Americas (118) and Asia/Pacific (134), and also spanned multiple public and private market segments:  Manufacturing (90), Financial services (80), Retail (80), Government (54, and "Other" (26), providing a broad sampling that in fact yielded a wide and interesting variation of responses on specific questions.  The survey was conducted in February of this year, and therefore after the global financial crisis had an opportunity to have a meaningful impact on IT economic and architectural decision making.

High level conclusions:  The summary opinions expressed in the report are very favorable to Linux, and include the following:

Linux has enjoyed significant commercial success on server platforms, and today it is aptly categorized as the most widely available server operating system the industry has ever seen, with availability aboard every major architecture. Linux is also the operating system of choice for many cloud providers and ISVs delivering software appliances today.

One aspect of the report that I found to be particularly interesting was its propensity to look backwards as well as forwards in time, demonstrating how Linux had racked up gains in 2001-2002, and indicating those areas where IDC believes that Linux will be well-positioned to make particularly dramatic strides in the months to come.  Virtualization is an example of such an area of opportunity, with 88% of the respondents indicating that they plan to "evaluate, deploy or increase their use of virtualization software within the Linux operating systems over the next 12-24 months."

I found the desktop data to be particularly noteworthy for two reasons, the first being that a full 50% of the organizations reporting "agreement or strong agreement" with the statement that they intend to accelerate their deployment of Linux on the desktop.  IDC expects to see this trend prove out in the marketplace, based upon three trends it has been following: the increasing variety and appeal of netbooks, which play well with Linux; increasing attractiveness of Web-based applications, which lessen the need for a full desktop environment; and recession-driven price concerns.

The second reason I find progress on the desktop to be significant is that Microsoft was able to capture, and continues to dominate, the desktop in non-commercial settings in large part because it first conquered the enterprise.  When workers thereafter began purchasing home computers, they were most likely to buy one with the same operating system and software they used at work.  Once workers begin to use Linux and Linux-compatible applications at their office desks, they will be more likely to shop for price, rather than operating system, when they buy the increasingly diverse range of Internet-enabled devices that will populate our homes, automobiles, pockets and purses.

The report also includes a great deal of detail broken down by market niche and geography.  These responses indicate that the most substantial Linux growth (example: look to the Asia/Pacific market for the most dramatic gains on both the client as well as the server side), and what features of a Linux installation business customers find to be of greatest importance (e.g., Security/reliability vs. acquisition cost).  The answers across sectors vary more than you might think.

Challenges:  The report (rightly) observes that Linux competes, "in a hostile marketplace against well-entrenched, well-respected competitors," and highlights several specific areas of challenges:

Opportunities:  More optimistically, the report finds much for Linux advocates to look forward to, noting that, "Linux has been widely seen as heir apparent to meaningful portions of the platform opportunity during current and future generations of industry deployments."  More specifically in the immediate future, IDC believes that Linux has the following "substantial opportunities:"

Wrapping up:  Given that there is little that any of us can do about the global economic disaster unfolding around us, it’s comforting to find that at least some good can come from anything, no matter how dire and dour that anything may be.  Hopefully, IDC’s prophecy will prove true that out of the ashes of our current woes will come a brighter, and more open, future.  Or, as IDC would phrase it, "The economic downturn of 2009 will be a demarcation line that is likely to highlight an acceleration toward adoption of standardized architecture across the industry."

I’d love to see a global economic rebound, but for now this will be good enough for me.

IT Organizations Turn to Linux in Economic Downturn

Novell today announced that a recent market survey, conducted by IDC and sponsored by Novell, reveals a surge in the acquisition of Linux driven by the worldwide recession. As more and more businesses seek to cut costs and find value, they are drawn to the tremendous economies that Linux offers, with more than half of the IT executives surveyed planning to accelerate Linux adoption in 2009. In addition, more than 72 percent of respondents say they are either actively evaluating or have already decided to increase their adoption of Linux on the server in 2009, with more than 68 percent making the same claim for the desktop. The study surveyed more than 300 senior IT executives spanning manufacturing, financial services, and retail industries across the globe, as well as government agencies.

The survey revealed key drivers of the burgeoning interest in Linux. The number one motivation executives gave for migrating to Linux was economic and related to lowering ongoing support costs. As a consequence, more than 40 percent of survey participants said they plan to deploy additional workloads on Linux over the next 12-24 months and 49 percent indicated Linux will be their primary server platform within five years. Notably, however, those who are hesitant to adopt Linux cited lack of application support and poor interoperability with Windows and other environments as their primary concerns.

“The feedback gleaned from this market survey confirms our belief that, as organizations fight to cut costs and find value in this tough economic climate, Linux adoption will accelerate,” said Markus Rex, general manager and senior vice president for Open Platform Solutions at Novell. “Companies also told us that strengthening Linux application support, interoperability, virtualization capabilities and technical support will all fuel adoption even more.”

“Economic downturns have the tendency to accelerate emerging technologies, boost the adoption of effective solutions and punish solutions that are not cost competitive,” said Al Gillen, program vice president, system software, IDC. “This survey confirms that Linux users view it favorably, and this view places Linux in a competitive position to emerge from this downturn as a stronger solution.”

An IDC white paper summarizing the survey findings can be found at http://www.novell.com/idc.