On this New Years Day weekend, an alert reader and blogger in his own right forces me to reflect on the timeless question posed in 1969 by the Firesign Theatre, "How can you be two places at once, when you're really no where at all?"

As New Years Day weekend is not a time favored by those that would toss their news into the pond of public opinion (unless they wish that news to disappear beneath the surface leaving as few ripples as possible), this post will not deal with the news of the day.

For the same reason, I have chosen this weekend to reveal a startling personal fact.

I have learned, through a seemingly reliable source, that I am really Simon Hoggart, London Guardian political columnist and BBC Radio 4 personality.

Yes, it appears that this is true, although it came as a complete shock to me as well. Although I have lived in England in the past and even read the Guardian on many occasions, I was totally unaware that I had not only read, but written, some of what I enjoyed until an alert reader brought a certain blog post to my attention. That entry was posted by Jon Levell in his thought provoking blog, Irregular Verbiage, aptly subtitled (the most recent entry is dated November 24th), “Sporadic Musings.”

It seems that in that most recent Musing, Jon was disposed to muse over Open Document. But his musing did not stop there. Instead, he culminated with this final, coy muse:

In other news, if you are obsessively reading info on the debate about open standards (and specifically whether public organisations like the government of Massachusetts or the European Commission should mandate that their employees use then) then a key source of info is the Standards Blog. What I find most intriguing is that you never see the Standards Blog’s Andy Updegrove and the Guardian’s/Radio 4’s Simon Hoggart in a room together. 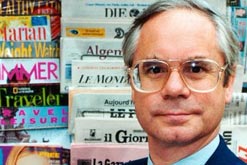 Hmm. He had a point. To the best of my knowledge, I had never been seen in the same room as Guardian/Radio 4’s Simon Hoggart; at least, to be objective, unless I was Simon Hoggart.

While some (Alan Yates springs to mind) might question my objectivity, in fact I have tried to be scrupulously objective in my reporting of facts and in any analysis of legal language that I offer on line, while preserving the right to express the opinions that I form as a result of what I observe. I strive to maintain a reputation for objectivity not only for its own sake, but in order that my opinions will be given credibility and weight, as well as the facts I report.

Thus it is that I feel that I cannot shy away from the challenge that Mr. Levell has obliquely presented.

I therefore take it as obligatory that I investigate Mr. Levell’s disturbing suggestion that I am “Guardian/Radio 4’s Simon Hoggart”, rather than mild-mannered Massachusetts attorney and standards wonk Andy Updegrove. After all, perhaps the greatest test of objectivity arises when evaluating oneself. Moreover, I shall do so with as much diligence as I would a contention that Mr. Yates (for example) is in fact Presidential Press Secretary Scott McClellan (perhaps I’ll return to that intriguing possibility in a future blog entry).

With that as prelude, here are the significant facts that I uncovered, as well as my ultimate conclusion after balancing all ambiguities against my own sense of identity:

2. Mr. Hoggart has an entry in the Wikipedia, and I do not. Pure coincidence, or careful research on the part of the Wikipedia staff, notwithstanding the recent controversy over the accuracy of the on-line encyclopedia?

4. Mr. Hoggart chairs BBC 4’s weekly show, The News Quiz, a delightfully erudite, humorous and occasionally pedantic show which I have often enjoyed. I have some small pretensions to being both erudite and humorous, while my partners regularly assure me that I am pedantic in the extreme.

5. Mr. Hoggart is the author of, among other works, a compendium of absurd Christmas Letters, titled The Hamster that Loved Puccini. I am forced to admit that I am fully capable of giving (and perhaps have given) such a name to a book, should I ever write/have already written one.

6. I have not been able to contact Mr. Hoggart by telephone to put the question to him/me, but each time I placed the call, his phone was invariably busy!

But enough of this.

Clearly, I have been unable to disprove the suggestion of Mr. Levell that Guardian’s/Radio 4’s Simon Hoggart and I are one and the same. Therefore, resolving all doubts against my own bias that I am, at least in this regard, unique, and assuming that Mr. Levell is a responsible practitioner of the blogging trade and has some evidence to support his implied allegation, I must, with regret, surrender my identity.

Finally, a note to Mr. Levell.

I see from the CV that you have posted at your site that you have earned a Ph.D in Theoretical Particle Physics. Having myself (or, as the case may be, Mr. Hoggart’s self) at best only a muddled and imperfect knowledge of quantum mechanics, perhaps you can explain, for Simon’s and my benefit and in the manner of the late lamented Douglas Adams, the seeming duality of existence that I/he/we/whoever seem to be experiencing. After all, if I’m not really here, how do I know that Mr. Hoggarts is really there? For that matter, what is the probability density of either, let alone both, of us really being in that room at all?

Or, as was once more succinctly phrased by the Firesign Theatre, in their 1969 appreciation album, All Hail Marx [and] Lennon, “How can you be in two places at once, when you’re not anywhere at all?”

Mr. Levell, Simon’s and/or my identity are at your mercy. We await your response.

Please muse on that.