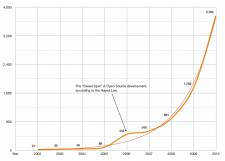 Companies that participate in hundreds of standard setting organizations (SSOs) often bemoan the continuing launch of more and more such organizations. Why, they are wont to ask, are so many new ones being formed all the time? And indeed, the aggregate participation costs for such companies in terms of membership dues and personnel are very high.

Of course, if you read the press releases of the new consortia launched in any given year, you'll see that almost all include some of the same companies among their founding members. So which is the more accurate picture — that there too many consortia, or too few? The best answer to both questions almost certainly is "yes."

How can that be true? Let’s look at these questions in reverse order to find out.

First of all, there are never likely to be enough SSOs, in the sense that while the inventory at any point in time will be large, the range of the available stock will rarely be completely comprehensive when compared to the technology landscape at the same instant. This is particularly true with respect to new technologies, where more often than not, no existing SSO will prove to be technically appropriate as well as interested in expanding its mission to fill the gap.

Even if a given organization is both interested and appropriate, it may still be a poor choice, because new technologies usually require more than simply a competent development platform to achieve market acceptance. An existing organization must therefore also stand up to further questioning: is it well respected? Does it already have the right stakeholders as members, or would they have to be recruited? Does it offer all of the supporting functions that success may require, such as promotion, certification, branding and training?

And even if it does, will it be willing to dedicate the necessary resources to aggressively promote the new standard’s adoption in the marketplace? The window of opportunity to achieve success may be narrow, and if the existing SSO is not willing to make the development and promotion of the new technology a high priority, then the technology, as well as the standards, may fail.

Viewed from that perspective, it’s easy to see why companies placing enormous economic bets on the new types of products and services often opt to found a new consortium, the sole mission of which is to achieve the rapid and wide adoption of its standards.

Not surprisingly, almost all new consortia do support emerging technologies (some of which will compete with existing technologies already supported by other SSOs). Often, several consortia will be formed simultaneously to support multiple new technologies, each competing to take advantage of the same recently identified market opportunity. In some cases, this will be wasteful, but in others it will allow the market to decide which standardized technology it likes the best. Sometimes, as occurred in the wireless space, several winners will emerge, each optimizing its technology and its standards to better address a subset of the originally defined market niche. The result? Faster time to market for more products and services based on more appropriate and competitive technologies.

That said, it’s also true that there really are too many SSOs (usually consortia, as compared to traditional SSOs), for three principal reasons: some organizations never should have been formed to begin with. Others support technologies that lose out to other contenders. Finally, some simply don’t know when to declare victory and shut down.

The last of these scenarios inevitably solves itself organically. When standards go into their maintenance phase, members lose interest and don’t renew. When that happens, revenues fall. If the standards created by the organization are still useful, the SSO will simply find another, healthier organization willing to take them on in exchange for picking up a few new members and whatever cash may be left in the bank account of the original SSO, which then dissolves.

The market verdict on SSOs that never should have been formed is usually delivered more swiftly and painfully. If the founders failed to gauge the level of interest in the marketplace for their new technology or business case, they will fail to attract enough members to complete the development cycle. The founders of other failed SSOs may have had a valid business goal, but either lost out to a competing technology, or did a poor job of structuring, explaining, and/or promoting their vision. Either way, these organizations die quietly in the dark.

The SSO proliferation issue is therefore a red herring: it’s not whether there are too many SSOs in existence at any point in time, but whether the right SSOs are available to do the work that needs to be done.

In the high-stakes, fast moving world of technology it’s important to realize that we need not only well-respected, well-run, stable SSOs to develop and maintain suites of standards to support technologies that have already found support in the market place, but also new, laser-focused consortia whose mission it is to tackle the difficult task of pulling the marketplace in new directions.

The art in such matters, then, arises from having the clarity of vision to know when a new SSO is needed and when it isn’t; the experience and skill to structure and promote the new SSO in such a manner as to ensure success; and the objectivity to determine whether the SSO, once mature, should take it’s place among other institutionalized SSOs, or declare victory, find a new home for its standards, and dissolve.

The above appeared as the Editorial in the September – October issue of Standards Today.  You can find the complete issue here.