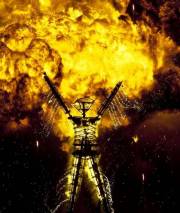 It was early afternoon when Frank and Josette rolled slowly into Gerlach, following a 1960’s era VW minibus.  Behind them was something that resembled a cross between a Viking long ship and a Mississippi river boat.  (“Ah! An Art Car!” Josette exclaimed.)

They hadn’t expected to find much in Gerlach, since Josette had already looked the hamlet up on the Internet.  A typical description read:

Welcome to Gerlach, Nevada (pop. 450). In this thriving metropolis you will find one elementary school, one high school, one post office, one propane distributor, one gas station, one motel, 3 bars and that's it.

But in fact there was much more, at least temporarily, because the Festival was about to begin. Almost overwhelming the few tired, dusty buildings that comprised downtown Gerlach was a collection of brightly hued tents and stands selling water, food, balloons, used bicycles, and much more.  Colorful pennants flapped in the breeze, and the road was thronged with a crowd that would have blended in well in Key West on New Year’s Eve, only with fewer clothes.  They bought their festival tickets and drove on.

A few miles out of town, they reached the edge of a great salt playa that stretched for mile after shimmering mile into the distance.  Towering over it was the geologic formation – Black Rock – that gave the desert its name.  Following a caravan of normal vehicles as well as otherwise uncategorizable art cars, they left the road and rolled off across the salt flat, eventually reaching two small tents between which each vehicle was required to stop.  A hand made sign proclaimed that it was the Festival Greeter Gate.

When at last it was their turn, Frank rolled down his window.  A young man wearing khaki shorts, sunglasses and hair spikes that stuck up through holes in his hat took their tickets.

Order your copy of

The young man let out a whoop: “We got us some virgins!” he howled, and the greeter gate crew surrounded the camper, opening the doors and dragging Frank and Josette out.  Josette cooperated, laughing, while Frank acquiesced unwillingly. Mortified, he followed Josette as she was led to a small wood tower inside which a large bell hung.  Hair Spike Man handed her a stick, instructing her to bang the bell while proclaiming that she was no longer a virgin.  She gave it an enthusiastic whack, after which her forehead was anointed with white playa dust.  Frank was not released until he had suffered a similar fate.

Josette looked at Frank sidelong as they drove away, trying not to laugh.

“Frank, you must try to join in the fun.”

“Fun?  Where’s the fun part?  All I see is a bunch of weirdos baking in 100 degree heat a million miles from nowhere.  And what’s that?”

Ahead they could see what appeared to be a massive ziggurat, rising more than fifty feet into the air.  Astride its apex stood an abstract, angular figure that was easily twice that tall, with legs spread and arms outstretched in above its head.

“Why that is the Man, of course.  What else would it be?”

But at this point, a sign directed them to the left, and now they drove around the perimeter of the vast, semicircular city that was still erupting from the alkaline lakebed, only to vanish once more only a week in the future.  Out of a dust swirl ahead, hundreds of bicycles began to emerge, each one propelled by a gaily painted, often topless (regardless of sex) rider.  In a few moments, the mob had sped by them and was gone.

“Uh, can you tell me what exactly that was all about?” Frank asked.

Josette laughed.  “Why must it be about anything?”

Frank was about to reply grumpily that everything was about something, but decided that on Black Rock Desert at this time of year that might indeed not be true. The pair of enormous triceratops made out of abandoned car parts they were rolling by just then seemed to confirm that conclusion.

It was almost dusk before they finally reached the place where vehicles were being directed to park.  Only foot and bicycle traffic would be permitted into Black Rock City until the festival was over.

Frank was removing the bicycles from the rack when he heard Josette let out a yell.  Turning, he saw a group of young men and women on bicycles come to a stop.  And Josette was running into the arms of a bronzed young man in shorts and sandals.  He wore a red bandanna around his neck and a wide brim hat above his handsome, stubbled face.

Frank stood dumbly by the camper.  Josette had told him earlier that morning that she hoped to rejoin the group she had been touring with before taking a solo detour to visit friends in Las Vegas.  But he hadn’t assumed that she would come upon them so quickly in all of the confusion of the emerging, temporary city.

A minute later, Josette glanced his way and saw him watching.  She took the young man’s hand and walked him over to the camper.

“Frank, this is Henri.  Henri, Frank is the one that rescued me by the side of the road after I hit a pothole with my bike.  My front wheel – it was such a mess!  And then he drove me the rest of the way from Eureka so I would not be late.”

“It is good to meet you,” Henri said pleasantly, shaking Frank’s hand.  His accent was almost imperceptible.

“Hi.  You too.”  Frank said awkwardly.  He turned to Josette as Helmut walked away.  “Well, enjoy the festival.”

Josette raised her eyebrows, “But of course you will stay, yes?”  It had not escaped her notice that Frank had unloaded his bicycle as well as hers before she had spied her friends.

Josette looked momentarily uncertain, but then she turned to glance at her friends.  They were standing by their bicycles, looking her way.

“Well, if you must.  But I will miss you.”  She pulled his head down and gave him a kiss on the cheek.  Then she hopped on her bike.  “You must promise to email me!”  And then she was on her way.

Frank tied his bicycle back on its rack, and walked slowly around the side of his camper.  He paused by the cab to watch the group of young adventurers pedal off towards the strange, temporary skyline of Black Rock City, above which the arms of the sacrificial Man stretched upwards in a triumphant V.  In front of Frank, everything was young and frivolous and alive, and behind him was the empty desert.

He climbed up into the cab and turned the key in the ignition.  Then he headed north.