Our story so far:  Security expert Frank Adversego has been passed over to lead a major project at the Library of Congress, but discovers that the Library has been hacked by a mysterious cracker with motives unknown; now, Frank learns that he may be coming under suspicion (the first chapter is here). Better yet, why not buy the extensively rewritten final version in eBook (for just $2.99) and print versions at all the usual outlets (find the links here). 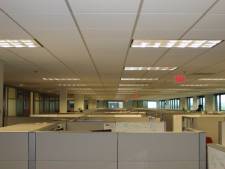 Monday morning Frank arrived at work early.  He scooped up the office copies of the daily newspapers from the pavement outside the staff door of the Library of Congress and noticed that the Washington Times was missing.  No need to wonder who arrived first today – that would be Rick - the only employee that wouldn’t bother to bring in a paper for anyone other than himself.

Sure enough, as Frank strode up the half-lit corridor in Cube City, there was Rick standing next to his cubicle, coffee cup in hand.  His face lit up as soon as he saw Frank.  “Morning, Frank,” he called out.  “Recovered from your big Saturday night yet?”  He raised his coffee cup in a mock toast and leaned casually against his cube so Frank could barely squeeze past.

But to Rick’s surprise, Frank gave him a hearty welcome as he wedged past.  “Great to see you, Rick, 'ole fella!  Only 70 more security-filled days till February 28, huh?”  Frank smiled as he sauntered down the aisle to the sound of coffee spraying from Rick’s mouth.  Frank wondered just how long it would be before Rick showed up, shamefaced, to ask for help.  A week at most, he thought.

Frank’s own smug smile faded when he snapped on his cubicle lights and saw the note waiting for him: “See me ASAP – George.”

George didn’t turn around when Frank appeared in the doorway.  He was clearly lost in thought, staring at the whiteboard in his office.  Frank realized that George had sketched out the LOC’s IT system at a high level, noting the particulars of the security defenses that stood between the wilderness that was the Internet and the data resources of the LOC.

Frank suddenly thought of the scene in Tracy Kidder’s The Soul of a New Machine where Tom West, the legendary Data General project manager, sat alone in an office opening off of a darkened room of computer work and test benches.  West’s career was on the line.  His future depended on whether the “Whiz Kids” he had hired out of college would be able to debug the new computer he’d convinced management to let him design and build.  Things weren’t looking good at that point, but West knew that all he could do was let things run their course without interfering and hope for the best.

Then he noticed something that he’d missed before: the email wasn’t addressed to just him, but to “All Personnel” in the LOC.

Frank looked up and saw that George was watching him closely.  “Would it surprise you, Frank, to learn that you were the only one who replied to my email message?”  Frank said nothing.  “And what exactly were you looking for on a weekend in that particular directory, anyway?”

Now Frank was annoyed rather than flustered.  “For Pete’s sake, George, I was looking for the draft of the security project outline I’d been working on – that’s all.”

“Looking for it, or deleting it out of spite?  And how about the other files in that directory?  Did you want to make it that much more difficult for Rick to get started?”

“What files?” Frank responded, “Are others missing as well?”

“Of course!” George barked.  “Two of them.  And one of them was Rick’s project outline – involuntarily ‘contributed’ to the Alexandria Project, whatever that is.”

Frank was now alarmed.  “Wait a minute, George!  Yes, I was ripped at Rick on Saturday night, but no – no way I’d ever pull a stunt like that!  And before you say anything, I know that the backup file for my outline is gone – probably yours and Ricks as well.  But I didn’t do that, either.  And I also know that it doesn’t look like there’s else missing, or at least not much, if there is.  We had almost the same gross storage numbers Sunday morning as we did the night before.”

“I know that!” snapped George.  “Do you think you’re the only guy around here that knows anything?  I’ve already run a complete scan, and there were only three other files deleted anywhere in the entire system that night.

George leaned back into his chair.  “Frank, are you aware that you and I are the only two people in the entire Library of Congress that have access to other people’s material in that directory?

Frank shook his head slowly from side to side.

George gave him a humorless smile.  “You should be a bit disappointed in yourself, Frank.  Maybe you’re not such a security hotshot after all.

Frank couldn’t listen any longer.  “Can the crap, George!  We’ve known each other for over 20 years.  I know this looks like some kind of silly stunt on my part, but it’s not.  And what would I really gain by deleting documents?  And hey – I’m no scholar of ancient Greek – I can’t even speak a modern language.  If it wasn’t for Google Translate I wouldn’t have a clue what that inscription said.

Frank saw George look a little uncertain, and pressed on.  “And anyway, how could I come up with something like that screen overnight – with all that fancy flash animation?”  Frank was feeling more confident now.  He sat back and waited.

“Okay, Frank.  Nice points,” George said at last.  “But this isn’t over yet.  If you didn’t delete those files, then we’ve got a real problem here.  You’ve got the security clearances to know that the CIA security hotshots use the LOC as a low public-profile testbed to stress test new security protocols before they roll them out in the Pentagon, the White House, and all the other Level 1 security government agencies.

“That means that if someone could hack your files, they could hack anything anywhere.”  George looked at Frank and waited, but Frank couldn’t think what George might be waiting for him to say.

“I’m going to have to ask the CIA to check this out,”  George said at last.  “You and I may have known each other for twenty years, but to them, you’re nothing.  Do you get it, Frank?”

“That’s all then,” said George, and turned back to his whiteboard.  Frank stood up to go, but then had a thought.

“George…you said that there were three files deleted in all.  What was the last one?”

George replied without turning around.  “The last one was my security folder.”  Then he did turn around.  “I think I’d watch my step for a while, if I were you.”

Frank closed George’s door softly and walked back towards his cubicle in a daze.  He barely noticed when Rick jumped up, obviously alarmed, as Frank passed by.

“Hey Frank!  Frank!  Can I check something out with you?  I just saw the damnedest thing I’ve every seen on a computer screen in my life!”

Check out the sequel to The Alexandria Project here